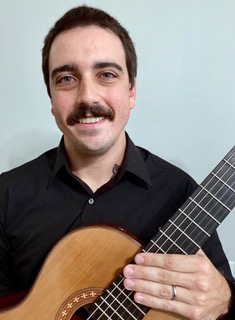 During the fall of 2016, Jim began conducting research on various classical guitar chamber ensembles including instruments such as: clarinet, oboe, flute, violin, voice, piano, and cello, hoping to discover new music and to record and perform these works. He is currently developing a curriculum for a classical guitar chamber music literature course, which will cover the music of guitar duo, trio, quartet, and focus heavily on his recent findings.

Since beginning his studies, Jim has won multiple classical guitar competitions and scholarships including first prize in the FCSAA convention and competition in 2014, first prize in the 2017 FAU Concerto Competition, was the recipient of both the Doris Paisley Memorial Musical Scholarship in 2013 and the National Society of Arts and Letters Scholarship in 2015, and was awarded a full-time graduate teaching assistantship at Florida Atlantic University from 2016-2018.