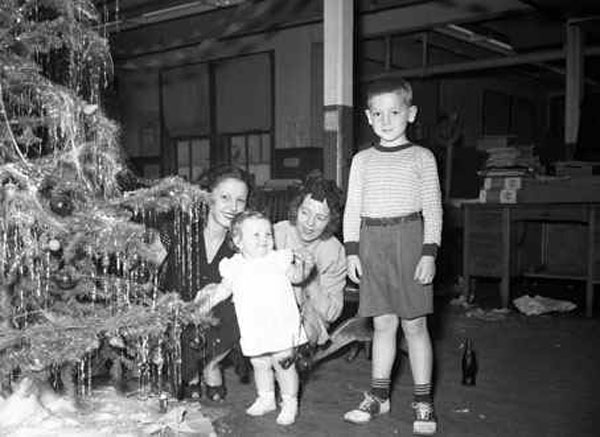 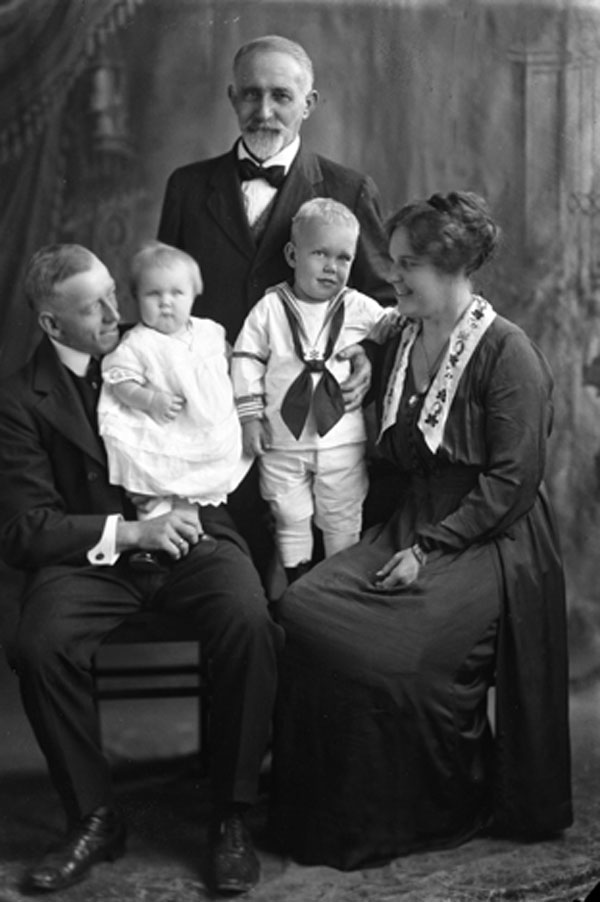 Members of the Jensen family, about 1920. The group may have gathered for the portrait just prior to enjoying a Thanksgiving feast.
Erik Overbey Collection. Negative: Jensen Family. 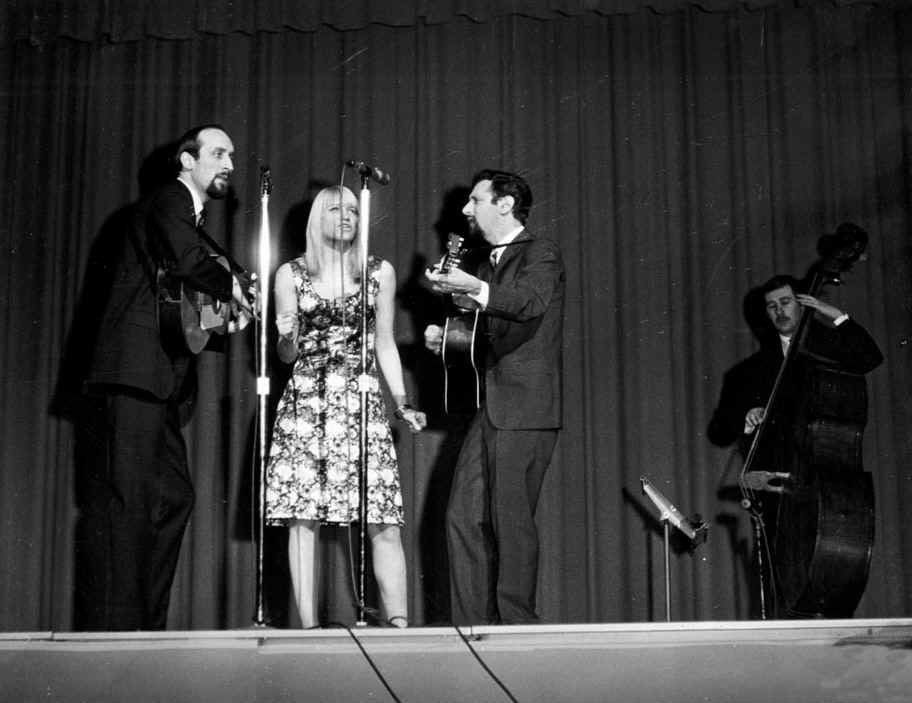 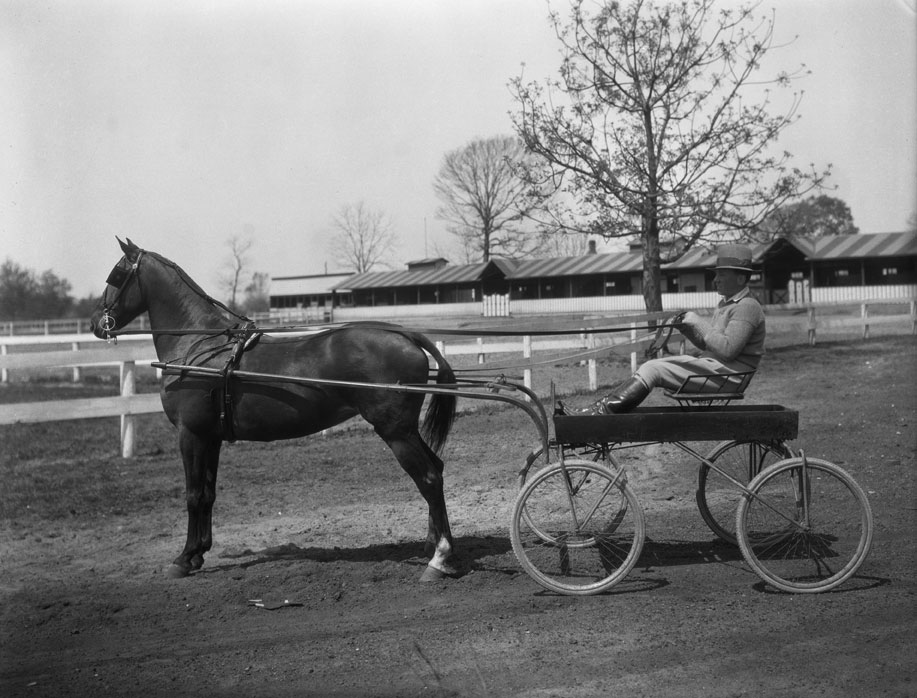 An unidentified man sits in a buggy while holding the reins of his horse. The photo was taken at Arlington Fairgrounds, which was located along Mobile Bay, about 1925.
Erik Overbey Collection. Negative: N-4448. 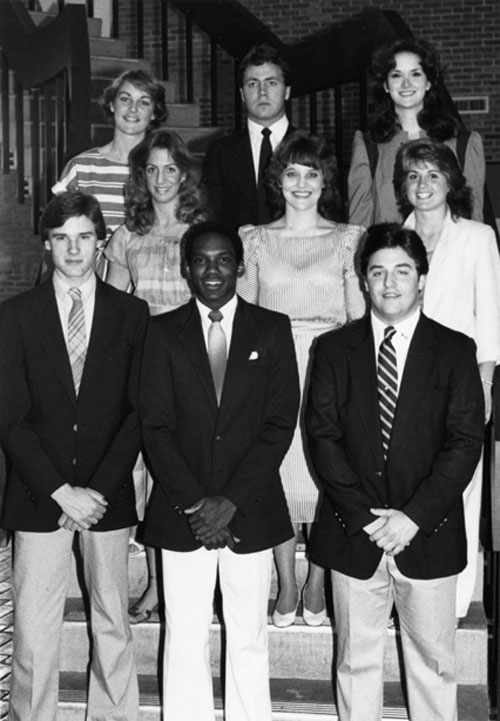 Members of the Southerners, USA's official host organization, 1988. Do you know the names of any of these individuals? If so, please email us.
University of South Alabama Public Relations Collection. 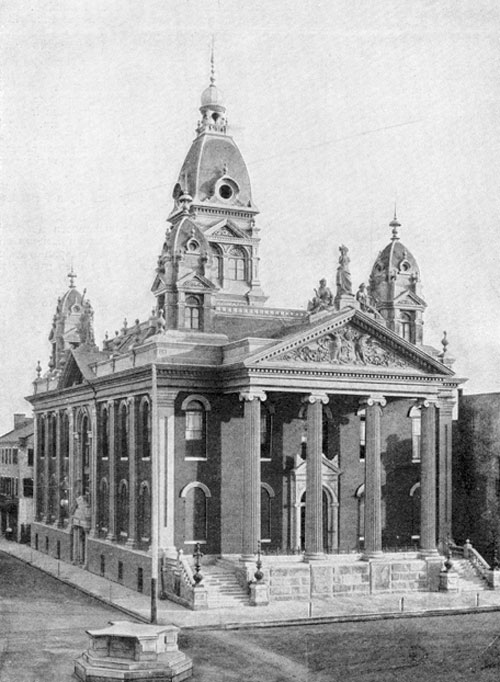 This image shows the courthouse that used to stand at the corner of Government and Royal streets. It was constructed in 1889 and designed by Rudolph Benz. The clock tower was 95-feet tall. Sadly its statuary fell victim to the city's periodic hurricanes. The courthouse was demolished in the 1950s.
Historic America Magazine, May 30, 1890. Negative: C-30,000. 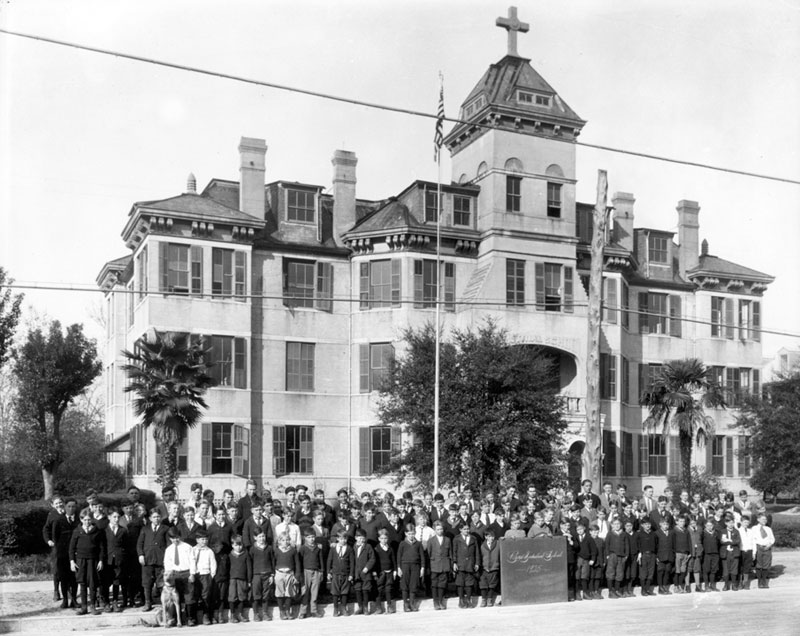 Children stand outside the Boys Industrial School in Mobile, Alabama. The school was run by the Brothers of the Sacred Heart. The image was taken in 1925.
Erik Overbey Collection. Negative: N-2553. 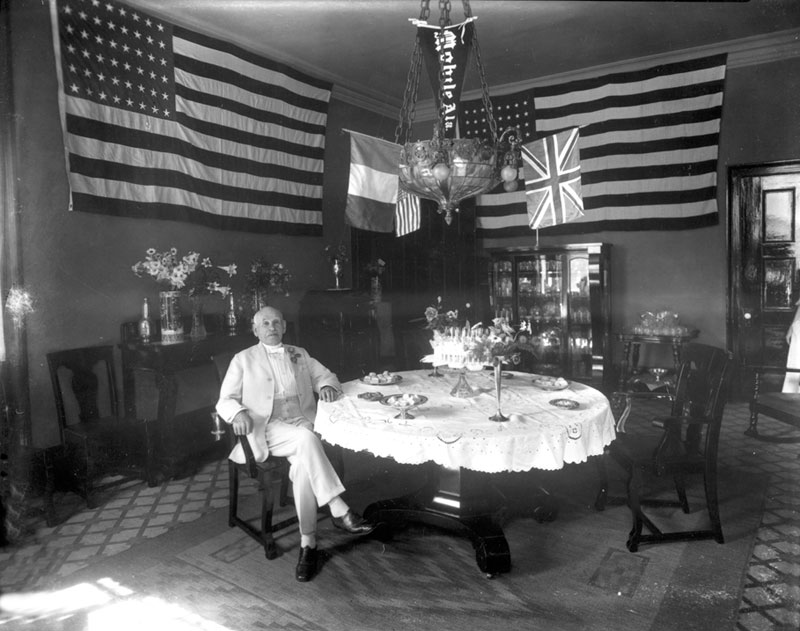 This unidentified man displays a number of flags, among them the Stars and Stripes and the Union Jack. The scene may have been photographed on a July Fourth some years ago. Also in the image is a banner reading 'Mobile, Ala."
Erik Overbey Collection. Negative: N-4293A. 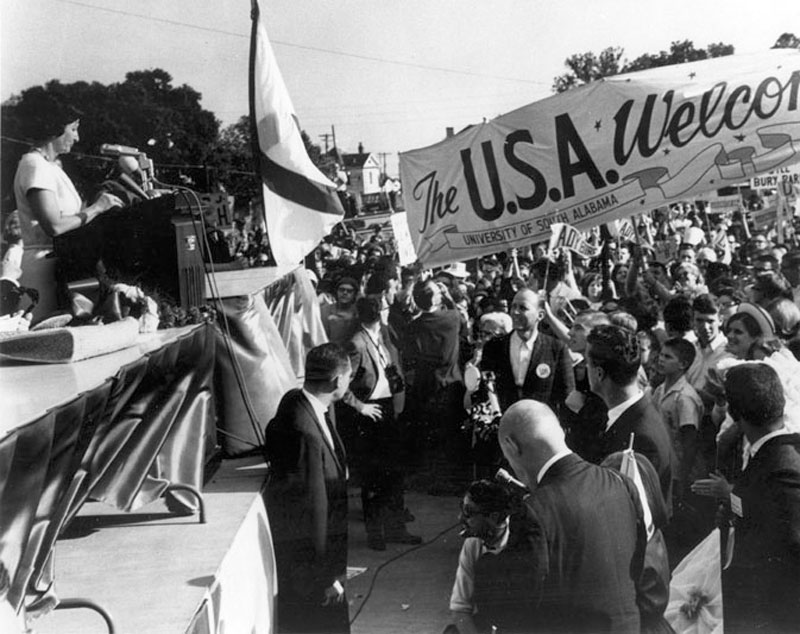 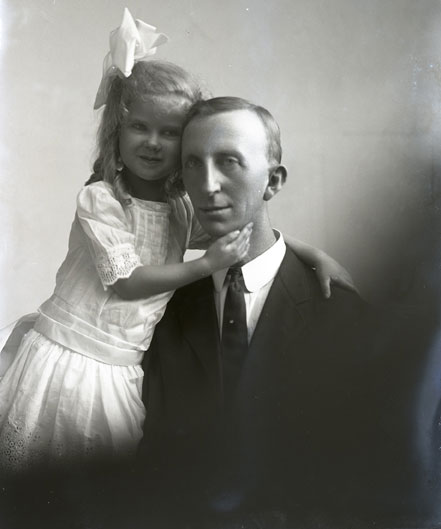 This beautiful image, presented in honor of Father's Day, shows a young girl with her arm across her father's shoulder and her other hand lightly caressing his face.
Erik Overbey Collection. Negative: Miss M. Jones.

Guy Diehl places a 33 1/3 RPM record on a turntable at the USA student radio station in 1965.
University of South Alabama Public Relations Collection. 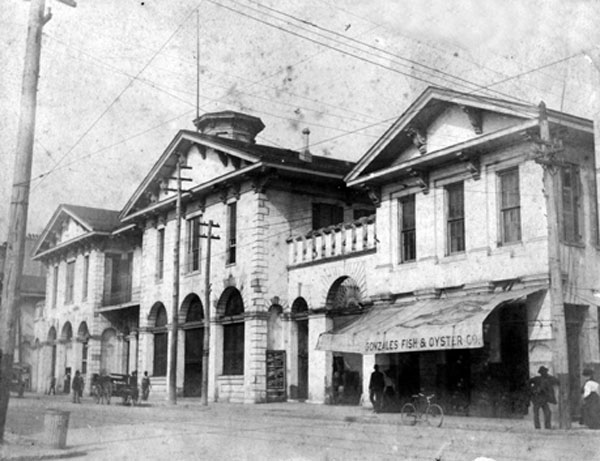 This image shows the old city hall/Southern Market about 1880. At this time this building was both the seat of Mobile's government and the location of one of the city's fresh meat/produce markets. Also shown in this image is the sign for the Gonzales Fish & Oyster Co. The building now houses the History Museum of Mobile.
Courtesy of Serena Edgar Willcox. Negative: C-31,168. 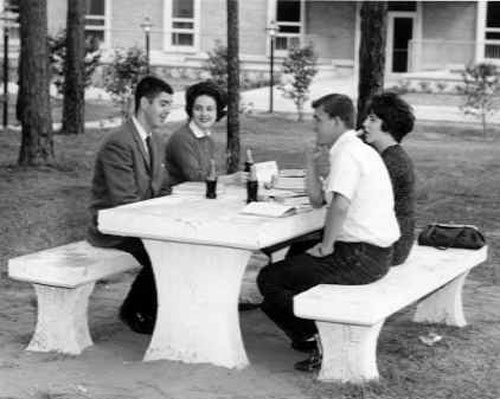 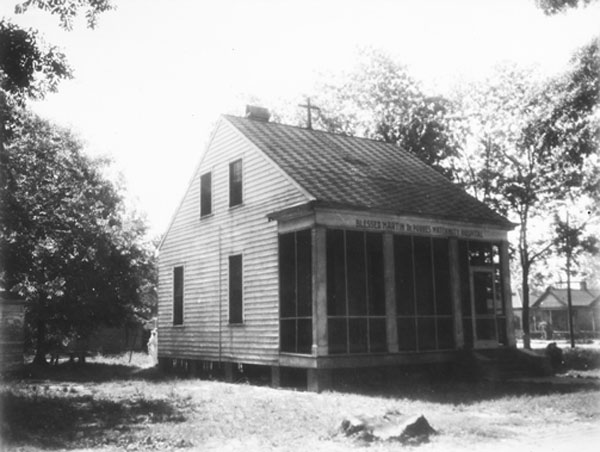 The original Blessed Martin de Porres maternity hospital for African-American women was a segregated institution within the Roman Catholic Church of Mobile, Alabama. This building was operated from 1941 through 1949.
Erik Overbey Collection. Negative: S-3548

Dr. Aaron "Bill" Williams has been associated with USA since 1967. He is the current director of USA's Coastal Weather Research Center. He is shown here about 1970.
University of South Alabama Public Relations Collection. 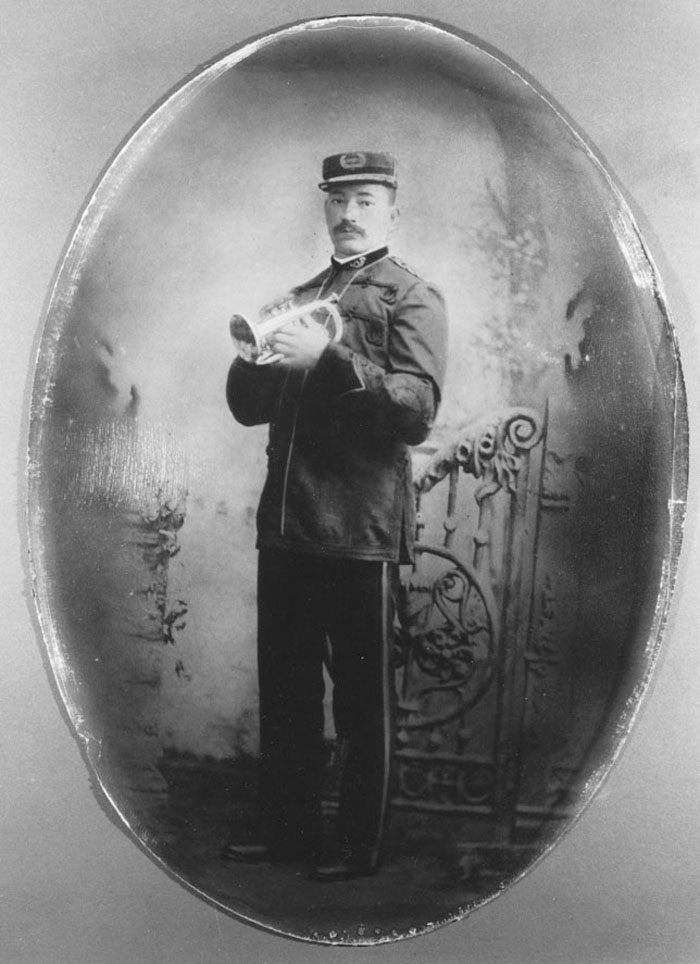 This photo of J. A. Pope, founder of the famed Excelsior Band, was taken around 1890.
Courtesy of Eoline Scott, granddaughter of J. A. Pope. Negative: C-15,095

USA students gather together after hearing word of the shootings at Jackson State University in Jackson, Mississippi, in 1970. The sign on the left reads in part: "Black students murdered in Mississippi! Mobile next?!"
University of South Alabama Public Relations Collection. 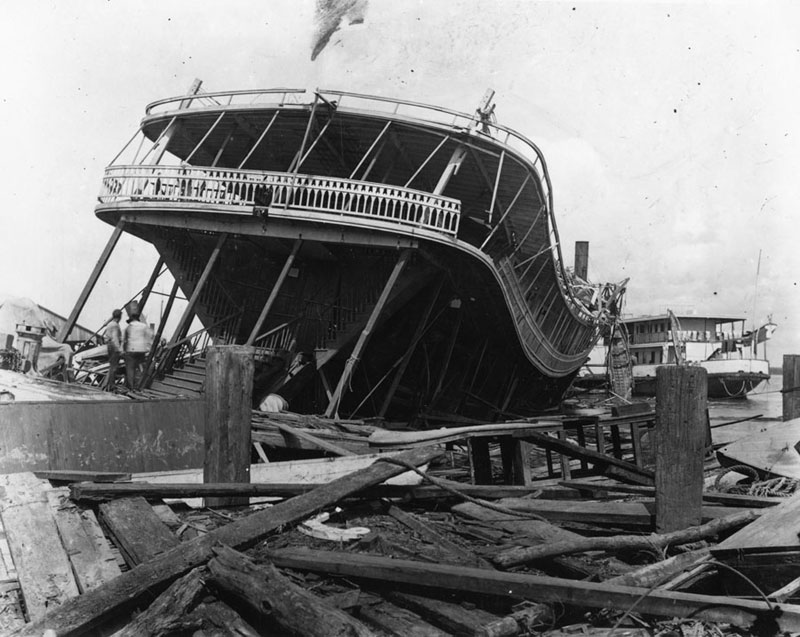 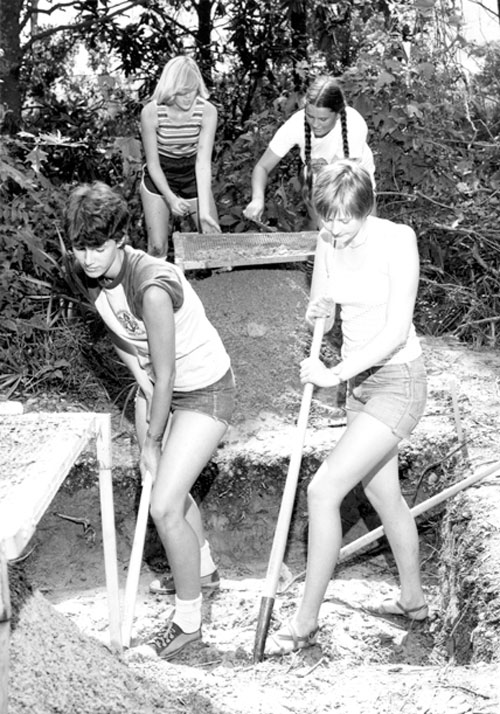