A Guide to Printed Material at The McCall Library 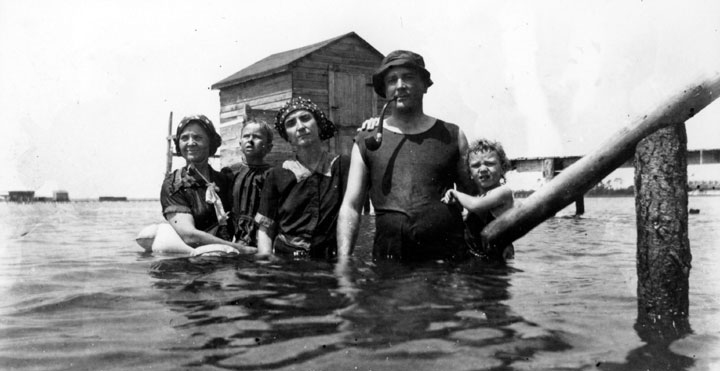 An unidentified family enjoys the water and refreshment it brings, circa 1900. Erik Overbey Collection.

This guide to printed material is presented alphabetically by type of material. It covers municipal publications, local newspapers, and city directories. For more information about these materials, please email the archives at mccalllib@southalabama.edu.

The Mayor's Message; Together with Reports of City Officers: 1876

AZALEA CITY NEWS (90-08-211)
The Azalea City News, a weekly newspaper dedicated to local events, arts, sports, and entertainment, was published in Mobile from 1974 to 1991. The early format was monthly and more political; it became bi-monthly, and finally weekly. The McCall Library holds 1982-1990. The paper has also been microfilmed. (See also Photograph Collections under the same heading.)

BARTON NEWS (94-08-281)
Until the late 1920s, the only high school in Mobile was Barton Academy. We hold the following issues of this school's newspaper: 1917-1927. (See also Manuscript Collections under Barton Scrapbook, Bartonian, and Olson Scrapbook.)

CITRONELLE CALL
We have scattered issues of this weekly newspaper from 1939 to 1941.

FAIRHOPE COURIER
We have the 1894-1904 issues of this newspaper on microfilm.

GULF COAST / SOUTH HISTORICAL REVIEW
This bi-annual publication of the Gulf South Historical Association, produced in cooperation with the University's History Department, began in 1985. It provided coverage of historical topics related to life in the Gulf South area of the United States and the Caribbean. It ceased publication in 2006. We hold copies of all of the issues as well as many of the photographs that appeared in the publication.

HARBINGER (01-08-374)
Publication of this local alternative newspaper began in April 1983 as On Guard. It ceased publication in 2001. The McCall Library's holdings include past issues of the paper along with documentation related to the periodical, such as correspondence, event advertisements, photographs, and comic strips. The paper has also been microfilmed.

MOBILE REGISTER AND JOURNAL OF THE COUNTRY
1849

MOBILE BAY MONTHLY
This local interest magazine began publication in 1986. The McCall Library's holdings are complete to the present.

MOBILE METRO
This short-lived news and arts weekly was published between May 1988 and February 1989. We have every issue.

MURPHY HIGH TIMES (94-08-281)
Before being named after a former school board commissioner, Murphy High School was known as Mobile High School. The McCall Library has issues of the Mobile High Times and Murphy High Times from 1927-1930, 1936-1945, 1947-1983, and 1998. (See also Manuscript Collections under William Cummins and Caldwell Delaney.

NEW TIMES
The McCall Library has this paper on microfilm from 1988 to 1994.

FAIRHOPE/DAPHNE
The McCall Library has directories for these two Baldwin County towns from 1978 to 1992.

MOBILE
The McCall Library has volumes for most years of the 20th century. Nineteenth-century directories are available on microfilm.

PRICHARD/MOBILE NORTH SUBURBAN
We have most volumes from 1956 to 1991. The title of the publication changed from Prichard to Mobile North Suburban in 1984.