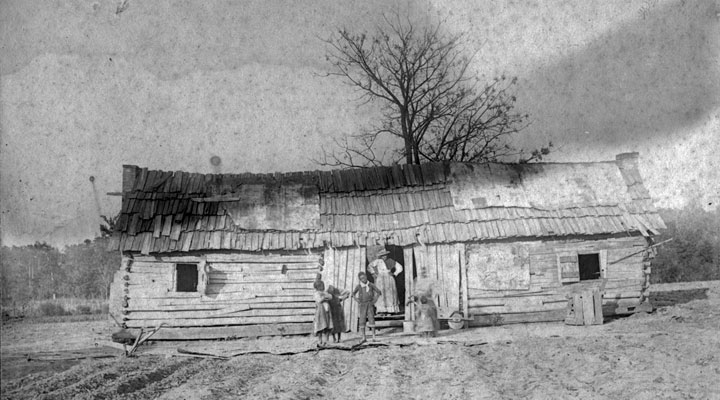 The twenty-four photographs shown below depict various scenes around the John Starke Hunter plantation located near Selma, Alabama. They also show scenes in Montgomery, Alabama, as well as images of flooding in Mobile, Alabama, after the 1906 hurricane.

John Starke Hunter was a businessman born in Pleasant Hill, Alabama, near Troy, in 1848. Hunter was the son of Ransom Davis Hunter and Martha Famariah Hunter, and the grandson of Henry Larence (or Lawrence) Hunter and Mary Howard Hunter. He fought with the Fifteenth Alabama during the Civil War. He also owned the 2500-acre Hunter Plantation near Selma, Alabama, from where most of these images were taken.

Gaylord Lee Clark was the maternal grandson of John Starke Hunter. The images passed down to his cousin Lettie Lee Smith, who lived in Mobile at the turn of the twentieth century, and then to the man who donated them to us.

The Confederate monument in Montgomery, Alabama, about 1900.

Flooding on Dauphin Street after the 1906 storm. This image was made by Johnson and Overbey.

The front and back of a postcard showing fifty-one portraits of members of the Confederate Army and Navy. The card was produced by C. D. Fredericks & Co. of New York.

The back of this photograph reads: “Rapid transit in the South, Montgomery Ala.”

Members of the Hunter’s extended family seated on the front porch of the Hunter Place, the home of Judge John Starke Hunter, 1898. The photograph was made by Collins and Sons.

George Pea Leonard, a former Hunter slave, 1894. The back of the photograph reads: “He was a good size boy at the time of our great-grandfather’s death.”

The front lawn and driveway leading to the entrance gate at the Hunter Plantation.

The north side of Government Street at Royal after the 1906 hurricane. The block is now taken up by the RSA Riverview Renaissance Hotel. Photo made by the Johnson and Overbey studio.

Gate and drive up to the Hunter Plantation, 1896.

The inauguration of Jefferson Davis as the first, and only, president of the Confederate States of America, Montgomery, 1861

The hallway of the Hunter Plantation home, looking toward the back, 1898. The photograph was taken by Collins and Sons.

Joel Taylor, a former Hunter Plantation slave, 1894. The back of the photograph reads: “Bought by our grandfather, Judge John S. Hunter, from Col. William Buford of Kentucky, to bring [Blondi] to Alabama, about forty-five years ago.”

The slave cemetery on the Hunter Place. Cedars were planted as grave markers. This photo was taken in 1896.

The state capitol in Montgomery about the turn of the 20th century.

Wreckage at the Mobile waterfront from the 1906 hurricane.

The back of this photograph reads: “Negro cabin near Montgomery Ala.”

The hallway of the Hunter Plantation home, looking toward the front, 1898. This photo was made by Collins and Sons.

The Pollard Home, Montgomery. The photo was made by the Tresslar Studio.

Servants and former slaves at the well located on the Hunter Plantation, 1898. This photo was made by Collins and Sons.