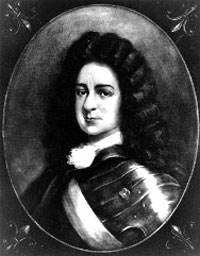 Marker Number 25: Le Moyne D'Iberville.
Location: Southeast corner of St. Francis Street, at Conception.
Text: To the glory of Pierre Le Moyne D'Iberville, the hero of Hudson Bay, of Newfoundland, and of Nevís (a Caribbean island), who founded Mobile in 1702, first city of French Louisiana. Born in Montreal in 1661. Died in Havana in 1706. (translated from the original French) 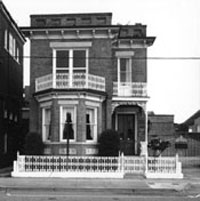 Marker Number 26: Neville House (1896).
Location: 255 St. Francis Street (between Joachim & Jackson).
Text: The Neville House has been placed on the National Register of Historic Places by the United States Department of the Interior. 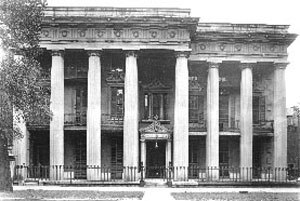 Marker Number 27: McGill Institute.
Location: Government Street, 1/2 block east of Jackson.
Text: In 1896 this was the site of an endowed Catholic high school for boys in memory of Arthur and Felix McGill. The Brothers of the Sacred Heart took charge of McGill Institute in 1928. The school was relocated to Old Shell Road and Catherine streets in 1952, and in 1972 merged with Bishop Toolen High School under the combined name: McGill-Toolen. It is operated by the Archdiocese of Mobile.
Class of 1942 on 50th Anniversary, May 24, 1992,
in memory of deceased McGillians and
Brothers of the Sacred Heart 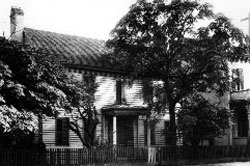 Marker Number 28: Lafayette Visits Mobile.
Location: Government Street (between Claiborne and Jackson).
Text: On this site stood the home of Samuel M. Garrow, where the Marquis de Lafayette was entertained on his visit to Mobile, April 7, 1825. Lafayette, French officer, statesman, and hero of the American Revolution, visited the United States as "Guest of the Nation" in 1824-1825. Mobile gave an enthusiastic welcome to the distinguished general.
Historic Mobile Preservation Society 1936 (replaced 1975) 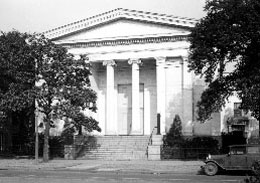 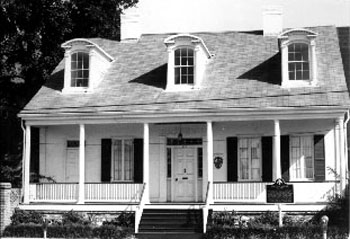 Marker Number 31: Portier House (circa 1833).
Location: Southeast corner of Conti, at Claiborne.
Text: Title to this land, part of a Spanish grant and formerly a burial ground, was clarified by the American State Papers in 1828. Michael Portier, Mobile's first bishop, made this his home from 1834 until his death in 1859. Four subsequent bishops resided here until 1906. Abram J. Ryan, poet-priest of the South, occupied the northwest corner room on the second floor from 1870 until 1877. Residence was restored by the Catholic Diocese of Mobile in 1958. In 1970 it was placed on the National Register of Historic Places.
Historic Mobile Preservation Society 1973 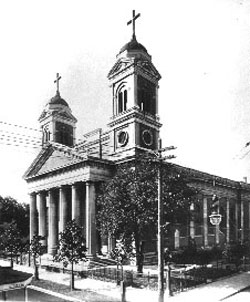 Marker Number 32: The Cathedral of the Immaculate Conception.
Location: 351 Dauphin Street.
Text: This square was a Spanish burial ground, the result of a royal grant. The land was designated as a site of the cathedral of the new diocese of Mobile. Plans were drawn by Claude Beroujon in 1833. The building was completed and consecrated under Bishop Portier on December 8, 1850. This structure serves the first parish founded on the Gulf Coast area in 1704 with Rev. Henri Roulleaux de la Vente as pastor.
Historic Mobile Preservation Society 1961 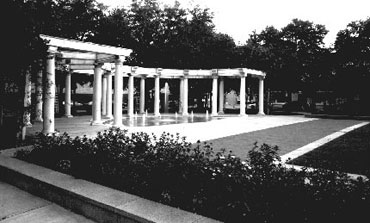 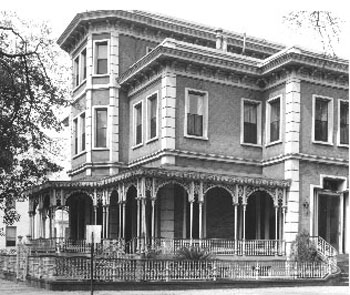 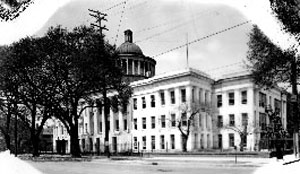 Marker Number 36: Malaga Plaza (2 markers).
Location: Facing away from the auditorium on Church Street.
Text:
1). This block of the Spanish Plaza is dedicated to the city of Malaga, Spain, sister city to Mobile. March twenty-first has been set aside by the city of Mobile as "Malaga Day" and the same day has been designated "Mobile Day" by the city of Malaga. 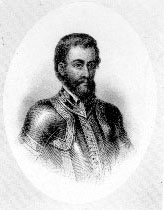 2). Spain first came to our shores in 1519, and her maps gave first to the world knowledge of our lands—Pineda, deSoto, and then Galvez. Returning in 1780, she conquered, and wise and benign, ruled for thirty-three years this city, whose citizens first received the land upon which this plaza stands. In the iridescent fabric of our heritage the threads of Spain are woven strong and bright. In commemoration of her influences, and joining with her in this monument, Mobile dedicates this plaza to Spain and her peoples, and toward the principle of strengthening the ties of friendship which have endured for more than four centuries.
City of Mobile (not dated) 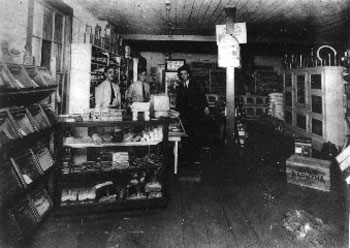 Marker Number 37: First Delchamps Store.
Location: Canal Street (two blocks west of Royal).
Text: Near this site, at Canal, Lawrence, and Madison streets, the first Delchamps food store opened November 8, 1921. Two young men and their three sisters, Alfred F. Delchamps, Oliver H. Delchamps, Edna H. Delchamps, Katherine E. Delchamps, and Annie M. Delchamps, pooled their resources and with less than $1,000, founded a cash and carry operation housed in a frame wooden building. With goodwill and honesty as their major assets, they began a company which was to become a leader in the food industry in the Southeast. The business was a cash and carry operation with emphasis on cleanliness and service. Cured meats, fresh greens, and dry goods were sold in "cents worth" portions. In 1928, a larger store was opened opposite the original. As of 1995, Delchamps operates 117 stores in Alabama, Florida, Louisiana, and Mississippi.* This monument is dedicated to the employees of Delchamps, who throughout the years have maintained the traditions of value, cleanliness, and service inspired by its founders.
Historic Mobile Preservation Society 1996.
*Delchamps sold interest in its corporation in 1997 to Jitney Jungle and is no longer in business 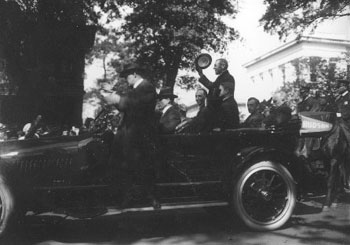 Marker Number 38: President Woodrow Wilson.
Location: Corner of Conti and Joachim streets.
Text: On this spot, October 27, 1913, Woodrow Wilson said: "I want to take this occasion to say that the United States will never again seek one additional foot of territory by conquest. She will devote herself to showing that she knows how to make honorable and fruitful use of the territory she has and she must regard it as one of the duties of friendship to see that from no quarter are material interests made superior to human liberty and national opportunity. This is not America because it is rich. This is not America because it has set up for a great population opportunities of material prosperity. I would rather belong to a poor nation that was free than to a rich nation that had ceased to be one with liberty. But we shall not be poor if we love liberty. Because the nation that loves liberty truly lets every man free to do his best and be his best."
Erected in his honor by the Mobile Chapter,
Daughters of the American Revolution
October 27, 1924 (replaced 2001)