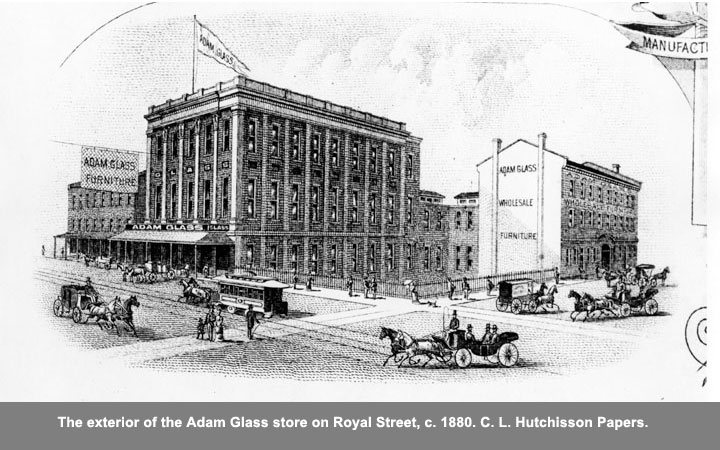 ALABAMA DRY DOCK AND SHIPBUILDING COMPANY
Contains annual reports from 1943 to 1991, and files from the public relations department at ADDSCO that contain information about the various ships built or worked on from 1919 to the 1970s. Most Liberty ships and tankers built during WWII have individual files with photographs and information about ship names, sponsors, launching ceremony programs, etc. There are also subject files concerning activities and individuals at ADDSCO and projects such as the Bankhead and I-10 tunnels and Auxiliary Submarine Rescue Ships. The collection includes copies of Fore & Aft, the company's publication for its employees. 12 linear feet.

ALCOA
The Aluminum Ore Company's refining plant in Mobile, Alabama, was constructed in 1937. At the time, it was the largest bauxite refining plant in the United States. The company discontinued its Mobile operations in 1982. The records of the public relations department at Alcoa contain historical information about the company, its products, and employees. Also included are copies of company publications, The Al-Zalean and Aluminews. 3 linear feet.

BROCK, GLEN PORTER
These are the personal papers of G. P. Brock, president and executive officer of the Gulf, Mobile & Ohio Railroad from 1957 to 1972 and chairman of the board of the Illinois Central Gulf Railroad following the merger of the GM&O and the Illinois Central. The collection covers the period from 1940 to 1987. 56 linear feet.

BUSBY, ANNA (MATTIE MAY JORDAN)
A diary written in 1912-1913 by Mattie May Jordan, an older sister of Anna Busby. The diary describes fur trading and farming activities in Washington County, Alabama. The diary has been published under the title Where the Wild Animals is Plentiful: Diary of an Alabama Fur Trader's Daughter (Tuscaloosa: University of Alabama Press, 1999). A typed transcript of the diary is also available. 1 linear foot.

CUMMINS, WILLIAM
Contains a 12-page program describing the 50th anniversary of the Murphy High School class of 1927. Also includes a personal scrapbook of William Cummins's father, who was the circulation manager at the Mobile Press Register. The scrapbook gives interesting insight into how the paper motivated its delivery boys. .25 linear foot.

DELANO / MAGOUN
A collection of letters, receipts, and invoices, 1835-1844, from various ship captains in Mobile to the ship owners, Benjamin Delano and Son of Kingston, Massachusetts, and Thatcher Magoun and Son of Boston. The ship captains describe their cargo and their experiences in the port of Mobile. .25 linear foot.

DOWLING, WILLIAM
Consists of 1 letter written by William Dowling to his brother Michael on April 13, 1869, at the beginning of Reconstruction. Dowling, living at the time in Marengo County, discusses the effect the newly-freed slaves were having on economic conditions in Mobile and in the countryside.

DURANT, W. D.
A small, handwritten township and range survey book of turpentine activities in Washington County kept by W. D. Durant for Taylor Lowenstein. The date of the book is hard to determine. It lists landowners and the amount of turpentine cupped per section of land. .10 linear foot.

HUTCHISSON JR., C. L.
C. L. Hutchisson Jr. (1902-1993) was the last of five generations of a family of builder-architects who were extremely influential in the architectural development of the city. This collection contains his personal correspondence and business records, minutes and newsletters from the Mobile Housing Board (1939-1946), the Alabama Society of Architects (1949-1958), and the Alabama Association of Registered Architects (1933-1949). Also includes more than 350 architectural drawings of structures designed by C. L. Hutchisson Sr. and Jr. (ca. 1908-1972). The drawings are indexed by address as well as the client's name. 21 linear feet.

KESLER, LUTHER E.
Contains 6 pocket diaries that document the life of this school teacher, farmer, and barber. The handwriting in the diaries can be hard to decipher but they are dated ca. 1908, 1912-1913, 1916, 1918, and 1923. The entries are extremely brief, sometimes no more than "at home," "short day," or "I'm sick." They trace the life of Kesler from his school days in Mississippi to his teaching career in Baldwyn, Mississippi, to his job as a truck driver for Railroad Mail Service. The diaries also list Kesler's cash balance and make notes about Mississippi history. .25 linear foot.

MC CORVEY, GESSNER T.
Kept in his youth by the former Alabama state Democratic executive committee chairman, this one-volume (November 1, 1907 - August 1, 1909) handwritten financial journal details household and business transactions. Gessner is perhaps best known as one of the leaders of the Dixiecrat revolt of 1948, and for his support of the Boswell Amendment, a 1945 codicil to the Alabama state constitution that selectively disfranchised blacks and poor whites.

MOBILE HOUSING BOARD RECORDS
The records of the Mobile Housing Board cover roughly the years 1950 to 1980 and concern the urban renewal projects which the housing board directed. These project areas included Water Street, East Church Street and Central Texas Street. The collection contains appraisal reports with photos of acquired properties, project planning books, maps of project areas, correspondence between the Mobile Housing Board and the Department of Housing and Urban Development officials, various HUD publications, as well as files concerning the activities of the Mobile Community Action Committee. Box inventories to the collection are available on site. 305 linear feet.

PACE ORCHARD COMPANY
While covering only a few years, this collection documents the nuts and bolts of operating and financing a Satsuma orchard. It consists of correspondence dating from February 1910 to May 1916 (with 1914 missing) between the operators of Pace and an array of other orchard owners, agents, nurseries, railways, and individuals. 2 linear feet.

SAUNDERS, JAMES E.
One 900-page ledger used by James E. Saunders. Entries cover the period from 1858 to 1863 and record profits and losses, commissions, sales, and interest and dividends. Saunders was a commission merchant in Mobile from 1842 and co-owner of the firm of Bradford and Saunders (which became Saunders and Son). Over 125 individuals and firms are listed, including a few African Americans.

TOULMIN II, HARRY T. AND MARY
Harry Toulmin II's papers includes a manuscript written by Toulmin that talks about the management of the Black Belt plantation owned by J. Freeman Suttle's son of the same name. In it, he discusses the convict leasing system and sharecropping and makes recommendations for improvement in the running of the plantation. 1 linear foot.