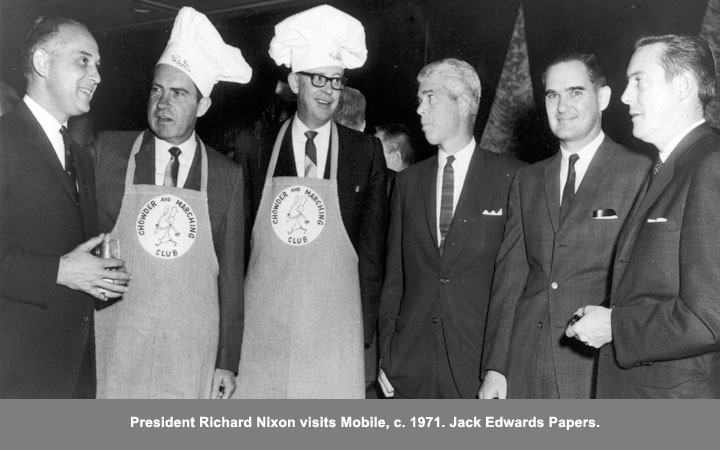 BOYKIN, FRANK
One photocopy of a 9-page letter from Frank W. Boykin to Speaker of the House of Representatives John McCormack dated August 20, 1963. The letter discusses many national and state political figures, including Senator Lister Hill and Presidents John F. Kennedy and Lyndon Johnson. The bulk of Boykin's papers are located at the Alabama Department of Archives and History.

DOWNING, MAURICE A. "CASEY"
These papers contain correspondence, printed matter, notes, and newspaper clippings relating to Downing's legislative career in the Alabama House of Representatives from 1962 to 1974. During those years he introduced legislation in support of the Mobile Greyhound Park, the East and West Fowl River connection, and the University of South Alabama Health Service Foundation. Includes materials through 1984. Other portions of the collection focus on mental health, conservation, and wildlife, as well as the Alabama State Docks, Mobile General Hospital, Brookley Air Force Base, and the Tennessee-Tombigbee Waterway. 5 linear feet.

EDWARDS, JACK
These are the official papers of Congressman Jack Edwards, who served in the U.S. House of Representatives from 1964 to 1984. The papers include correspondence, photographs, newspaper clippings, tapes, etc. Of particular local interest are materials relating to the Tennessee-Tombigbee Waterway Project and the closing of Brookley Air Force Base. Also included in the collection are papers relating to the Watergate scandal, school desegregation, and civil rights in general. 251 linear feet.

GALLALEE, JACK C.
Jack Gallalee served as president of the Mobile County School Board from 1961-1965. His personal files for the period of his term include correspondence, publications, and school board meeting minutes. Subjects range from federal educational mandates regarding integration to problems relating to fraternities and sororities in the Mobile County school system. 2.5 linear feet.

HOLMES, LARRY (87-09-152)
This collection contains materials amassed by Dr. Larry E. Holmes, former professor of Russian history at the University of South Alabama, during the course of an administrative and legal battle between him and the university over tenure. The case revolved around issues related to academic freedom and civil rights. The papers include a chronology of events, documents related to the FBI and its concern with Holmes’ activities, correspondence, memoranda, briefs, interrogatories, affidavits, newspaper clippings, reports, and depositions. The collection also includes a CD of an interview conducted in August 1973 with Holmes by Mike Sloan of the local radio station WABB and Don Henry of the Alabama Education Association. A later donation made by Holmes was added to this collection and contains correspondence, grant awards and applications, newspaper clippings and other material related to Holmes’ professional career, and a copy of Holmes’ 1997 article on Moscow School No. 25 that appeared in the Slavic Review. 1 linear foot.

LEAGUE OF WOMEN VOTERS
Minutes, annual reports, newsletters, correspondence, and miscellaneous papers of the Mobile chapter of the League of Women Voters dating from 1955 to 2007. Also includes a series devoted to environmental issues. 15.75 linear feet.

LEFLORE, JOHN L.
Materials relating to various activities of civil rights leader John L. Leflore. Included are correspondence, minutes, and other records of the regional, state and local NAACP (1939-1956); the Mobile Housing Board (1966-1970); the Alabama House of Representatives (1975-1976). The collection also contains one CD with John LeFlore's FBI file, photographs, and articles written by Mr. LeFlore for various newspapers. The papers have been microfilmed. 10 linear feet.

LEFLORE ORAL HISTORY PROJECT
Contains videotaped interviews with Joseph Langan, O. B. Purifoy, Dr. W. B. LeFlore, Janet LeFlore, Fred Richardson, J. C. Randolph, Hon. James T. Strickland, Henry Williams, Geraldine Clark, and Lancie Thomas. The interviews, filmed in 1996, are available on 34 VHS video tapes. They were produced under a grant from the Alabama Humanities Foundation for a documentary on John L. LeFlore. An index for the tapes is available.

MC CORVEY, GESSNER T.
Kept in his youth by the former Alabama state Democratic executive committee chairman, this one-volume (November 1, 1907 - August 1, 1909) handwritten financial journal details household and business transactions. Gessner is perhaps best known as one of the leaders of the Dixiecrat revolt of 1948, and for his support of the Boswell Amendment, a 1945 codicil to the Alabama state constitution that selectively disfranchised blacks and poor whites.

MIMS, LAMBERT C.
This extensive collection consists of a multitude of subjects connected with the long-time political career of this former mayor/city commissioner. Consisting of a vast array of genres, from judicial and legal records to proclamations and press releases to campaign material and photographs, the information in this collection covers local topics typically found within such collections, but it also contains material related to Mims' personal religious views and to the American Public Works Association. Mims was rotating mayor and public works commissioner of Mobile from 1965 to 1985. 136 linear feet.

MOBILE AREA CHAMBER OF COMMERCE
This Mobile organization was the first in the state, chartered by the Alabama Legislature in 1854. The materials in this collection relate primarily to the development of Dauphin Island and include brochures, photographs, scrapbooks, and news clippings. The collection also includes, however, two scrapbooks dedicated to the 1971 visit of President Richard Nixon. 2.75 linear feet.

MOBILE COUNTY CIRCUIT COURT RECORDS
The Mobile County Circuit Court records include 613 linear feet of individual case files and over 300 bound volumes of minutes, final records, etc. The materials date from ca. 1830 to ca. 1917. Naturalization records created by these courts have been indexed by Clinton P. King and Meriem A. Barlow in Naturalization Records, Mobile, Alabama, 1833-1906, and the minute books containing these records have been microfilmed. Divorce cases are also available on microfilm and we have indexed the records in Index to Divorce Cases of the Thirteenth Judicial Circuit Court of Alabama, 1816-1918. Many of the early cases require cleaning and preparation by staff before researchers can use them. For more on these publications, please visit this page.

PALMER, MARY S.
Mary S. Palmer received an MA in English from the University of South Alabama in 1984. This collection contains research notes for her thesis entitled "Keep on Keeping on: The Story of George Wallace," as well as an unpublished 1995 popularized and updated version of that thesis. The collection also includes news clippings about Wallace's career and the assassination attempt on his life, notes, interviews, and memorabilia. 1.5 linear feet.

EDDIE CURRAN / DON SIEGLEMAN RESEARCH PAPERS
These papers were compiled by Eddie Curran, a former reporter with the Mobile Press Register. They consist of investigative material gathered by Curran during his research into the gubernatorial career of former Alabama governor Don Siegelman. The papers include public records, court records, email, correspondence, newspaper stories, financial documents, election records, notes. The papers are not comprehensive and do not reflect material demonstrating the former governor's point of view. 8 linear feet.

THOMAS, JUDGE DANIEL H.
Daniel Holcombe Thomas was born in Prattville, Alabama, in 1906. He was appointed to the federal bench by Harry Truman in 1951. Although Judge Thomas retired in 1972, he retained supernumerary status until his death in 2000, making him one of the United States' longest serving justices. Known as a conservative, Judge Thomas adjudicated several civil rights cases, the most important to our area being the Birdie Mae Davis v Mobile County School Board school desegregation case. He also developed a national reputation for presiding over maritime cases. This collection consists of 13 personal scrapbooks that contain miscellaneous speeches, letters, pictures, programs, and articles that span Thomas' entire judicial career, and one bound volume of congratulatory letters to him on the 15th anniversary of his installation as judge. 2.5 linear feet.

TOULMIN, HARRY T.
Contains miscellaneous documents (1856-1936) related to Judge Harry T. Toulmin (1838-1916). The documents include biographies, deeds, and other property records (1869-1904), tax records (1856-1898), his will, estate papers, correspondence (1863-1936), and two photographs. Also includes one receipt book (1858-1868). Some of the material relates to Toulmin's judgeship and Civil War service. The judge began practicing law in Mobile in 1860. He entered the Confederate army in 1861 as a private and was later promoted to captain. Toulmin resumed the practice of law after the war. The collection also includes a list of officers and soldiers of the 22nd Alabama Infantry, as well as a typed report from Toulmin regarding the infantry's part in the battle at Chickamauga, during which the son of Josiah Nott was killed. Some of the correspondence is between family members or concerns family business and a number of the letters concern Toulmin's selection to the federal bench. The receipt book lists expenses for, among other things, renting slaves. The collection also includes an invitation to a breakfast engagement with President Grover Cleveland. 1 linear foot.