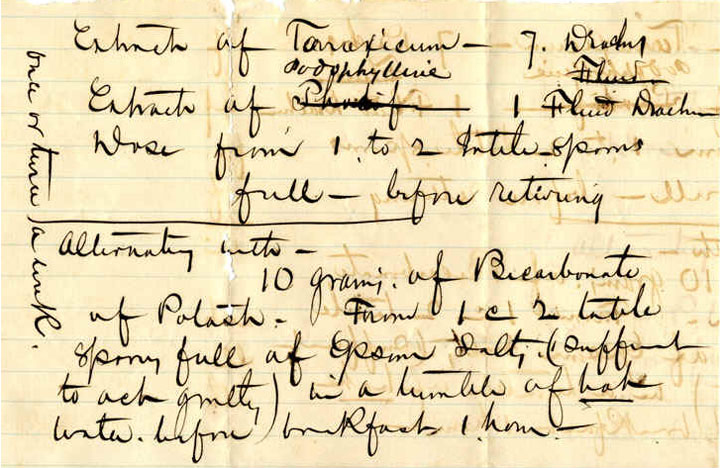 A medicinal recipe from the McCall Papers, circa 1870.

The McCall Papers contain approximately one million documents related to Alabama's Black Belt region. Included in the collection are the papers of multiple families, as well as advertisements, almanacs, books, broadsides, brochures, circulars, flyers, magazines, newspapers, pamphlets, periodicals, reports, and sheet music. This exhibit includes just a select few items from the collection. Aside from the printed material, only two of the families in the collection are represented below: the Pickens family and the Winter family. The extended Pickens family ran several large plantations in what used to be known as Greene County (but now is part of Hale County). The Winters, on the other hand, were entrepreneurs who ran several businesses in Montgomery, Alabama, and Augusta and Columbus, Georgia. We intend to add more to this exhibit as organization of this massive collection continues. 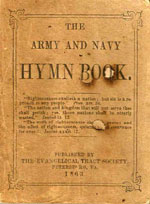 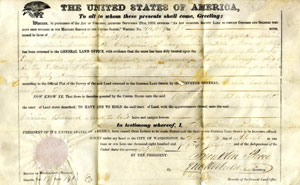 A presidential land grant from the Franklin Pierce administration, dated April 1, 1854. The grant is made out to Catherine Schriffle, the widow of George Schriffle, a veteran of the War of 1812. The land was situated in Cahaba, Alabama. 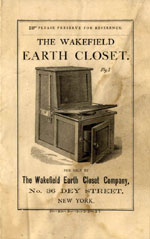 A pamphlet about the Wakefield Earth Closet, an early indoor toilet that used ash and fine dirt to cover odors. The pamphlet was produced circa 1878. 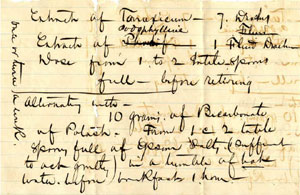 Medicinal recipe handwritten by Joseph Samuel Prince Winter. It's a two-part remedy meant to be taken once or twice a week. 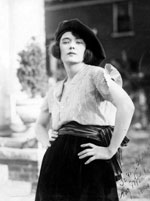 Margaret Mitchell, author of Gone with the Wind, 1921. The photo is inscribed "To my Apache." Click on the photo for more on the meaning behind the inscription. 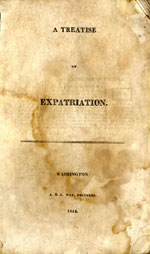 Cover of A Treatise on Expatriation by George Hay. The book discusses English rights vis-a-vis the United States, a subject very much debated by our Founding Fathers. 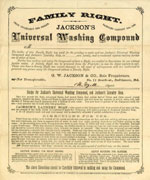 G. W. Jackson and Company's Universal Washing Compound. The Baltimore company issued these certificates as a way to cut down on the infringement of their formula, which is included on this imprint dating from 1867. 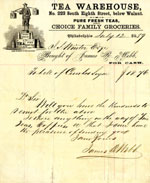 A receipt for the purchase of tea by J. S. Winter from the James R. Webb Tea Warehouse of Philadelphia, dated July 12, 1859. 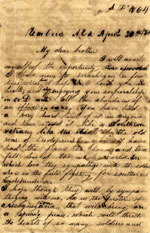 First page of an 1864 letter from William Pickens to his older brother Samuel, off serving during the Civil War. The letter is written from Umbria, one of the Pickens' three cotton plantations. William would die just a few years later 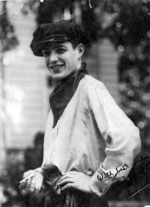 Adolph Sigmund Weil. Notice that he's dressed similar to Margaret Mitchell, seen in the above photo. Weil was the "Apache" in Mitchell's inscription. Click on Mitchell's photo to learn more. 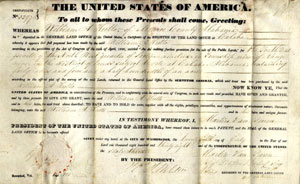 An 1838 presidential land grant from the Martin Van Buren administration. It is made out to a William Hutto for land in Cahaba, Alabama. 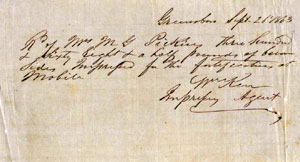 A receipt for 368 1/2 pounds of bacon confiscated or purchased from Mary Gaillard Thomas Pickens by the Confederate government on September 26, 1863. Mary was the sister-in-law of Alabama's third governor Israel Pickens, and the mother of the William and Samuel mentioned above. 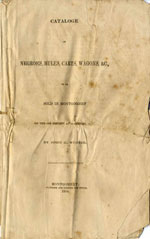 “Catalog of Negroes, Mules, Carts, Wagons to be Sold in Montgomery, 1854.” The African Americans and other items belonged to the Winter Iron Works and John Gano Winter and his son Joseph. The catalog is very unique. Inside it lists all of the slaves owned by the company, as well as those slaves' skills and attributes. Handwritten beside each description is the price at which the slave sold. 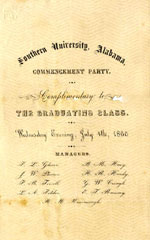 Invitation to a commencement party being held for the graduates of Southern University on July 4, 1860. The school was established in Greensboro, Alabama, in 1856. It went on to merge with Birmingham College and is now known as Birmingham-Southern. One of the managers of the event was G. W. Creagh, a prominent member of the Creagh family of Clarke County, Alabama. 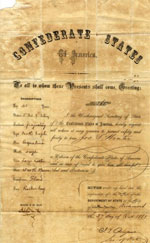 A Confederate travel pass issued to Joseph Winter by the Confederate secretary of state Judah P. Benjamin on October 27, 1863. Winter had requested permission to travel outside Confederate lines to secure materials for one of his businesses. A supporter of the Union, Winter then took his money and fled to London. The pass describes Winter as having a large mouth and aquiline nose.