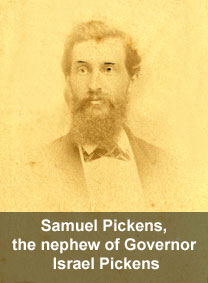 Israel Pickens (1780-1827), third governor of Alabama and briefly United States senator, was one of the most influential figures in Alabama and the Deep South during the early 19th century. Born in North Carolina and educated at Jefferson College in Pennsylvania, he married Martha Orill Lenoir in 1814, practiced law, and represented North Carolina in Congress. A protégé of Andrew Jackson, Israel Pickens took Jackson's advice and joined the “Great Migration” of Americans to the Deep South during the decade and half after the War of 1812. Moving to the heart of Alabama’s enormously fertile Black Belt along with his brothers Samuel, John, and James in 1817 during the territorial period, Pickens gained appointment as federal register of the United States Land Office at St. Stephens, Alabama. With quick access to wealth and a great need for stability, the cotton frontier benefited from talented lawyers like Pickens, who branched out into land speculation, banking, and other investments. Like Pickens, most lawyers also styled themselves as “planters,” because of the huge profits to be made. As public lands became available for sale, emigration to Alabama reached epidemic proportions and was called “Alabama Fever.”

Using the leverage of his office, Pickens purchased about 3,500 acres of the very best plantation lands in the Black Belt for himself. In only five weeks in late 1819 and early 1820, his slaves cleared one hundred acres and continued to work. Within a few years, after his wife’s death, he established and operated a large plantation near Greensboro. The acceleration of the development of the Southern frontier was built around such huge tracts of fertile lands, large numbers of slaves, and a ready market for cotton, which commanded record prices from mercantile factors and shipping firms. By the 1840s Alabama was the most prolific cotton-producing state in the entire South, and Mobile was second only to New Orleans as the South’s busiest and fastest-growing port city. Most of the materials in the Pickens Papers concern the family’s plantation operations, relations with slaves and freedmen, and other business operations, from the early to late 19th century.

Israel Pickens, like other lawyers and planters, participated heavily in early state politics. He was a delegate from St. Stephens to the state Constitutional Convention in 1818 and served on the committee that drafted the constitution. Pickens worked for several progressive measures, including the popular election of the governor and other officials, complete freedom of religion, and unusual requirements for the humane treatment and welfare of slaves. Toward the close of the convention, Thomas Bibb and Israel Pickens tried, but failed, to give the legislature power to grant citizenship, including voting rights, to free blacks. Because of his political influence as Alabama’s third governor (1821-1825), Pickens hosted the sensational tour throughout the state by the great French hero of the American Revolution, the Marquis de Lafayette. General Lafayette reached Montgomery in early April 1825 and was welcomed by Governor Pickens and honored with a banquet. He then traveled down the Alabama River, stopping at several points along the way, and finally visited Mobile. There are herein several files of important correspondence and documents concerning the logistics, politics, publicity, and costs of Lafayette’s tour.

Israel Pickens also invested heavily in real estate in Alabama and across the South and was committed to establishing public banks. The concentration of economic authority in banks and the resulting political controversy reflected the huge wealth that sprang from Alabama’s massive escalations in cotton production and real estate values. In 1818 Israel Pickens became the first president of the Tombeckbe Bank of St. Stephens, chartered by the first territorial legislature. Southern banks normally confined their operations to financing the production and trade of agricultural commodities, but the Tombeckbe Bank and the Huntsville Bank were dramatic exceptions. Pickens effectively took advantage of the exploding production of cotton in Alabama’s Black Belt by involving his bank directly in marketing. Although it did not purchase cotton outright, the bank was actively engaged in marketing the crop. Pickens announced to the board of directors that he had appointed an agent “to take charge of all cotton which may be delivered for shipment.” The bank paid all marketing costs, which were then repaid out of the proceeds of the crop.

When Israel Pickens became governor in 1821, he initially favored a state bank, with only 40 percent of the stock owned by the government and of which the existing private banks would eventually become branches. However, when the legislature adopted a charter that would have given the existing banks control of the new state institution, Pickens vetoed the bill. His strong involvement in banking reflected the intense political conflict over the future of banking in the United States throughout the first half of the 19th century. During his successful re-election campaign, Pickens became an advocate of reform and proposed the wholly state-owned Bank of Alabama, whose creation soon shaped the course of antebellum Alabama’s history. Several thousand letters and documents herein concern political and business matters directly connected with controversies over banks.

During the next quarter century or more, the struggles surrounding the creation, administration, and dissolution of the bank energized and epitomized the efforts of ordinary Alabamians, especially small farmers, to prevent large planters and their commercial allies—represented by the so-called “Georgia Machine”—from gaining political dominance of the state. Half of the Bank of Alabama’s capital was derived from the state’s surplus revenue and from the federal government’s land grants to support a state university, internal improvements, and to provide a site for a state capital. The other half came from proceeds of sales of state bonds. Clearly acting on behalf of the great majority of Alabamians, Pickens proclaimed that “banks must at this day be viewed as public state institutions, rather than associations for private enterprise.” The Bank of Alabama began operation in 1825. The legislature unanimously elected Andrew Pickens as its first president. Israel Pickens’s brother Samuel Pickens served as state comptroller. In the process, Pickens and his supporters utterly defeated the rival “Georgia Machine.”

As a result of his political success, Israel Pickens was one of the most popular governors in Alabama history. His hand-picked successor, John Murphy, was elected with no opposition. Murphy appointed Pickens to fill a vacated seat in the United States Senate. Almost immediately after entering the Senate in 1827, he began to suffer with tuberculosis and he went to Cuba to recuperate. He died there in April and was later buried at his plantation home “Greenwood” in the Pickens Family Cemetery, near Greensboro.

Israel Pickens’s brother, Samuel Pickens, Jr. (1791-1855), married Mary Everard Meade in 1830 and shortly afterward built his plantation home “Umbria” near Greensboro. Mary Pickens died in 1831, and Pickens remarried Selina Louisa Lenoir, and they had one child, Thomas Lenoir Pickens. Then Selina Pickens died, making Samuel Pickens, Jr., twice a widower. He was remarried again to Mary Gaillard Thomas, and they had several children. In addition to the flagship estate “Umbria,” the family purchased and developed several other plantations (including “Canebrake” and “Goodrum”) and collectively owned several hundred slaves. Samuel Pickens, Jr., died in 1855, leaving his wife Mary a large fortune and many responsibilities in running the plantations and investments prior to, during, and after the Civil War. The 1860 census noted that she owned assets of $500,000, including more than 200 slaves.

Of particular importance to the Civil War are the detailed and truly outstanding diaries kept by two sons of Samuel Pickens, Jr., Samuel Pickens III (1841-1890) and James Pickens, and their correspondence with several family members throughout the war. As a soldier in the Fifth Alabama Infantry, Sam Pickens served in Robert E. Lee’s Army of Northern Virginia and experienced sustained combat and hardship. He was wounded once and captured twice. His diaries and letters are among the most detailed and openly honest sources by a Civil War soldier in the ranks. His correspondence with family members, when compared with the diaries, reveals complex relations with loved ones and civilians on the home front. (Sam Pickens’s diaries and letters are valued at $125,000.)

James Pickens was much less inclined to a soldier’s life. He tried to hire a substitute but could not find one. Forced into the Confederate army, he became ill and spent much time in military hospitals. James Pickens’s voluminous diaries cover several decades from the 1850’s to 1914 (valued at $45,000). He married Juliet Damer in 1870, and they had three daughters. The Pickens family of Greensboro, Greene County, Alabama, operated several plantations, owned many slaves, had numerous investments in real estate and industries (including a brick factory), and experienced challenging postwar adjustments in Reconstruction politics and economic policies, labor arrangements with former slaves, and race relations during the late 19th century.*

*Copied verbatim from the appraisal of the McCall Papers conducted by Dr. Michael Parrish of Baylor University.