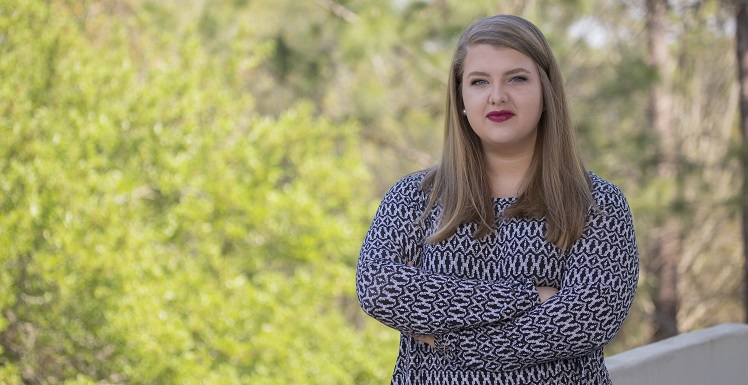 Sophomore Anisa Heilman, whose parents are deaf, has co-authored a bill under consideration in the Alabama legislature addressing deaf and hard of hearing language opportunities for children. Bottom photo: During last month's Higher Education Day in Montgomery, Heilman visited with Rep. Margie Wilcox of Mobile, who is sponsoring Heilman's bill.

There's a saying that goes, “Be the change you want to see in the world.” Anisa Heilman is all about that.

A sophomore at the University of South Alabama, she has co-written a bill that's being considered by the state legislature in Montgomery. Her bill addresses language opportunities for deaf and hard of hearing children under the age of 5. It's personal for Anisa, because both of her parents are deaf.

Growing up in Odenville, Ala., about 30 miles northeast of Birmingham, Heilman came to understand that her parents weren't like other parents. “I actually didn’t realize that my parents were any different until I was about 8 years old. The schools and my friends’ parents really emphasized the difference,” Heilman said.

“I started to feel like I was constantly explaining my first language — which was sign language — and how I was raised, and why my parents were Deaf.” (“Capital D for when the person is proud and fully accepts their ‘deaf’ identity,” she added.)

But as she got older, Heilman channeled her feelings into something positive. “Later, this frustration and shame turned into pride and a culture to be celebrated after I attended the KODAWest Camp in California. KODA stands for Kids of Deaf Adults, and it's for kids under the age of 18,” she said. Today, Heilman is a CODA, or Child of Deaf Adults, which is for children 18 and older.

At the camp, she was surrounded by people who understood where she had been, and they taught her to celebrate her uniqueness and be unapologetic about it. She's attended the camp as a camper and counselor for the past six years.

Empowered after her camp experiences, Heilman wanted to do more. That's when the notion of legislative change started to take root.

“I joined a group called RESULTS that taught me not to cower or feel distant from our legislators. They taught me that our legislators work for us and that they want to do what their constituents want,” Heilman said.

She volunteered and lobbied for several bipartisan causes and pieces of legislation, both in Washington, D.C., and Montgomery, and the legislative option came into focus for her. “What we needed for our deaf, hard of hearing and deaf/blind kids was legislation that holds the correct people accountable for these kids’ development and language acquisition,” Heilman said.

So she got to work. In her freshman year at South, she joined hundreds of USA students at Higher Education Day in Montgomery, and she used the time there to meet with Rep. Margie Wilcox of Mobile County and other members of the southwest Alabama legislative delegation, along with members of the deaf community, who encouraged and guided her through the law-making process. “Margie Wilcox was extremely personable and understanding and supportive; she had friends in the deaf community and wanted to support our efforts,” Heilman said.

“Anisa's energy and enthusiasm are contagious,” Wilcox said. “More than that, she's learning important lessons in how our government works and how citizens can and should have a significant impact. She's just been a real joy to work with.”

“Legislators are incredibly busy and will respond better to something that is well-prepared,” Heilman added. “We had to write the bill, provide the facts and statistics, boil our message down to an ‘elevator pitch,’ and educate the legislators as efficiently as possible.” Heilman also sought and received guidance from people in other states that had passed similar bills.

“Our bill was based on other LEAD-K bills in Hawaii, Kansas and California,” she said. LEAD-K stands for Language Equality and Acquisition Development for Deaf Kids. “We approached Rep. Wilcox in hopes of her becoming our sponsor. She gladly agreed and we’ve been working with her since.”

The entire process has been an emotional experience for Heilman, a strategic communications major with a minor in political science.

“Actually having legislation you are so passionate about and you co-authored go through the steps, can be overwhelming and anxiety-laden. I’ve learned that hard work, dedication and perseverance really do make a difference. I’ve also learned that I have to be patient and trust the people I elected to care about the same things I, and many other Alabamians, do.”

It should come as no surprise, then, that Anisa's career objectives are right in line with what she's doing now. “My ultimate goal is to start my own non-profit fighting for deaf equality in the education, workforce and accessibility realms.”

In the meantime, she's currently an interpreter for phone calls between hearing and deaf/hard of hearing/ American Sign Language-users for Convo, a video relay agency. Video relay enables persons with hearing disabilities who use American Sign Language to communicate with voice telephone users through video equipment, rather than through typed text. Before she branches out on her own, she hopes to work with Convo in public relations, advertising, marketing or lobbying.

Already, though, she's made an impression on her two biggest supporters; her parents, who worked within the Alabama School for the Deaf school system and who inspired Heilman to be the change.

“I think my parents are not surprised, since I grew up speaking my mind, constantly being involved and showing compassion and passion for the deaf community at a young age. I believe they are proud in the humblest way possible.” 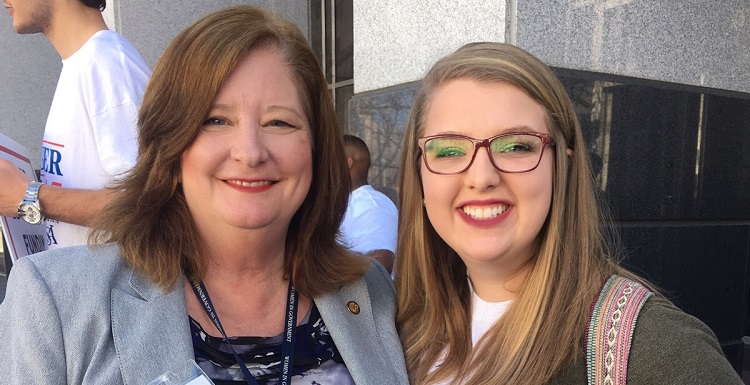