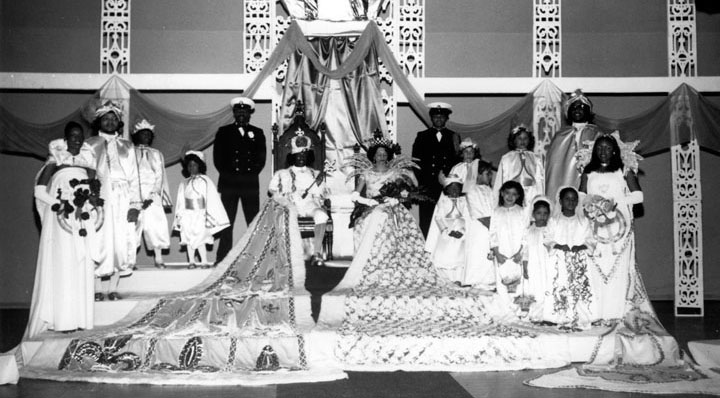 This guide includes records of organizations, papers of individuals, oral interviews, and legal cases. It provides a brief description of each collection, including dates, size, and links to any online finding aids. It also lists secondary sources at The McCall Library that support the collections, such as dissertations, theses, books, articles, and newspapers.

This collection include 16 CDs containing 33 oral interviews held with former faculty and students of the segregated, all-black Most Pure Heart of Mary Catholic School. The school was organized in 1899. Some of the interviewees include Dora Finley, Sheila Flanagan, J. Gary Cooper, Harold Ducloux, Fred Richardson, and former Clinton secretary of labor Alexis Herman. There are transcripts for most of the interviews.

Most of the early material for the local branch of this organization is located in the John LeFlore papers. The material dates from 1930 until 1956, when the organization was banned from operating in Alabama until 1964. The records include correspondence, affidavits, financial and membership records, minutes, miscellaneous notes, and promotional materials. Early regional and branch correspondence focus on employment opportunities and public accommodations. Following the 1944 Supreme Court decision that white primaries were unconstitutional, the focus shifted to political rights.

Founded in 1966, the Neighborhood Organized Workers (NOW) was a local African-American direct-action group that strived to achieve political, social, and economic reform in their community. This collection contains copies of NOW’s FBI files as well as oral interviews with three former NOW members. For more on the collection, please click here.

This civil rights organization existed from 1966 until 1973. Material relating to this organization is located in the NPVL records and vertical files. See also, articles listed below.

The exact date of the founding of the Non-Partisan Voters League is unknown but was probably before 1956 when the Alabama attorney general banned the NAACP from the state. The collection holds records which span thirty years (1956-1987) with the bulk of materials between 1961 and 1975. As the records of this collection reveal, the NPVL demanded the hiring of more black municipal employees, sued to force desegregation of the Mobile school system, filed complaints with the U.S. Department of Justice to open public accommodations to all, launched massive voter registration campaigns, and challenged the constitutionality of Mobile's commission form of municipal government.

A local branch of this organization existed in Mobile County for a brief period in 1965. Material relating to the SCLC can be found in the NPVL files.

Original black and white prints of various sizes showing scenes from the Dallas County plantation of Judge John Starke Hunter. Included are several images of former Hunter Plantation slaves. There are also scenes taken in Montgomery, Alabama, including the inauguration of Jefferson Davis, as well as images of flooding in Mobile, Alabama, after the 1906 hurricane. There are no negatives but all of the images have been digitized.

On March 21, 1981, James "Tiger" Knowles and Henry Francis Hays, local members of the United Klans of America, lynched Michael Donald. Hays and Knowles kidnapped Donald and beat him with a tree limb before slitting his throat. They then took his body and hung it from a tree on Herndon Avenue near his home. Eventually both Knowles and Hays were convicted of the crime. Knowles was given a life sentence and Hays was executed. The papers of Michael Donald contain selected Hays and Knowles court proceedings, the bulk of which is related to Hays. Also included are FBI investigation files, coroner’s report, and several articles relating to the cases and the Ku Klux Klan.

John LeFlore worked as a civil rights activist in Mobile for fifty years, 1925-1975. His papers document the early work of the NAACP in Mobile and provide insight into his life and aspirations. Other papers in the collection reveal LeFlore's work in public and private life. He served in leadership positions in many organizations ranging from the Brotherhood of Sleeping Car Porters to the Mobile Committee for the Support of Public Education.

Two videotape interviews with Paulette Davis Horton (August 3 and 9, 1994). Horton is the author of The Avenue and other local history books. To quote from this source, the user must obtain permission from the interviewee or his or her heirs.

These interviews are recorded on audio tape. The four interviewees participated in Mobile's civil rights movement and the Neighborhood Organized Workers or supported part of the movement. Some restrictions may apply.

The nine interviewees participated or assisted with the Neighborhood Organized Workers (NOW) and/or other civil rights organizations in Mobile during the 1960s and 1970s. The interviews are recorded on audio tape and the transcriptions are included in the collection. An email conversation has been printed and is included in the interview transcripts. These interviews were part of Ms. Case’s M.A. thesis, which is listed in the secondary sources below.

This lawsuit challenged the constitutionality of Mobile's commission form of municipal government, and it brought about the mayor-council form of government the city now operates under. This collection include case files from the U.S. District Court and includes all documents in the civil suit, materials from the plaintiff and defendant, and all other official documents.

These records include divorce cases and other civil and criminal cases involving African Americans. Indexes are available.

The Mobile Housing Board was organized in 1935 during the Great Depression when business leaders petitioned the city commission to grant them a charter for a non-profit public corporation to provide construction jobs and housing for the poor. The objective was to obtain funds to clear sub-standard housing and build safe and sanitary housing for the poor. The major project areas were the Broad Street-Beauregard Street connector, Water Street, East Church Street, and the Central Texas Street. The records of the housing board are organized by urban renewal project areas. Included are acquisitions, appraisals, condemnations, rehabilitation, relocation, completed contracts, urban renewal files, and loan and grant applications.

Vertical Files
Researchers will find vertical files at The McCall Library relating to African-American churches, education, and individuals, as well as the articles listed below.

Blacksher, James and Larry Menefee, "At Large Elections and One Person, One Vote: The Search for the Meaning of Racial Vote Dilution." (VF)

McCrary, Peyton, "History in the Courts: The Significance of the City of Mobile v. Bolden." (VF)

Lois Virginia Meacham Gould, "In Full Enjoyment of their Liberty: The Free Women of Color of the Gulf Ports of New Orleans,
Mobile, and Pensacola, 1769-1860" (Ph.D. diss., Emory University, 1991).

Dian Lee Shelley, "The Effects of Increasing Racism on the Creole Colored in Three Gulf Coast Cities between 1803 and 1860" (M.A. Thesis, University of West Florida, 1971).