Photograph Sources for Portraits at The McCall Library 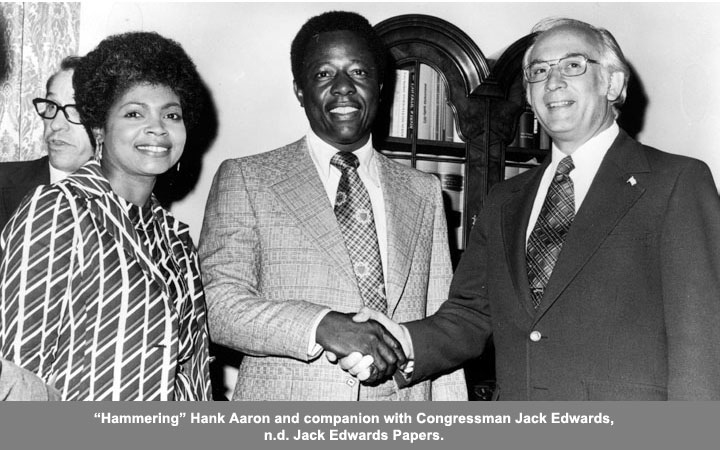 BURTON, WILSON C. (88-03-131)
This collection is comprised of approximately 77,000 negatives (4 x 5 and 5 x 7) taken from 1935 to 1998 [bulk 1957-1994]. While portraiture makes up most of the collection, it also contains historically significant images such as the graduation photograph of Vivian Malone. An index to the collection is available on this web site.

BUTLER, ROSEMARY PARKER BRAZIEL (99-04-350)
Rosemary Butler's mother, Maybell Parker Braziel (Mrs. Benjamin), was a descendent of the Max Collins family of Mon Louis Island. Her father, August F. Parker, was in the Creole Number 1 Fire Company. Her collection consists of 24 mounted photographs of various sizes (primarily cabinet cards) and 4 postcards. The majority are portraits made by various Mobile studios during the late 19th and early 20th centuries. The subjects are predominantly Creole. Of particular interest is an image of a member of the Creole Fire Company and another, made around 1902, of a group at the Cathedral School for Creole children, which was in operation from 1847 to around 1910. The Mobile Genealogical Society has additional information on Butler.

CHAMPION, BETTIE B. (99-01-348)
A descendent of the Franklin Jackson McCoy family, Bettie B. Champion's collection is made up of 6 glass plate negatives (4 x 5) showing interior views of the McCoy home at 701 Government Street (now the site of the Mobile Public Library). There are also 3 unidentified daguerreotypes, 2 unidentified ambrotypes, and 6 unidentified cartes de visite. In addition, contains 14 prints of miscellaneous sizes (some mounted) of the McCoy family and friends. Most of those are unidentified but they do show Mattie B. and Fannie Ward Sheibley, and Franklin Jackson McCoy. The collection includes 4 prints of Thomas Cooper DeLeon and his home. The collection also has miscellaneous papers, including a letter dated 1926 from George Fearn, president of the Mobile Public Library's executive committee, to Fannie McCoy regarding the purchase of the McCoy property; a 1908 invitation to graduation ceremonies for Barton Academy, a 1926 Mobile High School commencement program, a circa 1893 invitation to a Knights of Revelry ball, and a 1925-1926 report card.

COCHRANE, KATHARINE CRAMPTON (95-09-291)
Within this collection are 4 photograph albums and numerous loose images of the family of John T. Cochrane Sr. and his second wife, Katharine Crampton Cochrane. The photos date from the pre-Civil War period through the 1900s. Some are dated. They include tintypes and porcelain pictures. Subjects are Cochrane, Crampton, and Simpson family members, as well as Forts Morgan and Gaines, the Cochrane Bridge, and the Cochrane home. There are also World War II military photographs of Jewish detainees who had been tortured and murdered. An online exhibit of material from the collection can be viewed here.)

CROSBY, SAMUEL N. (85-03-71, 85-03-117)
This collection is comprised of 515 negatives (35mm), 366 of which are of the Crosby family, taken during the tracing of the family's genealogy. The remaining 149 negatives in this collection were used to illustrate a book by Samuel N. Crosby, The Baldwin County Bench and Bar, Courtroom Tales and History. The book is also available.

EICHOLD, SAMUEL (84-06-69, 86-10-127)
Contains 131 color slides and 99 black and white copy negatives (35mm) of Dr. Eichold's postcard collection. The postcards date from the early 1900s to the 1930s and show primarily Mobile and Fairhope scenes. An inventory of the postcards and contact prints are available. The McCall Library has also copied material from scrapbooks belonging to the Comic Cowboys, a Mardi Gras organization, which was used to illustrate Dr. Eichold's book, Without Malice (1984). There are 109 color slides and 22 black and white negatives (4 x 5) in this group. Consists of papers that include a number of photographs of locally significant doctors, including Josiah Nott, Henry Levert, Eugene Bondurant, and Tucker Frazer. Dr. Eichold apparently gathered these images together as part of his research for his contribution to the 1984 publication Dictionary of American Medical Biography. Not all of the files on the doctors contain a photograph, however, and many of the images were laminated, contributing to deteriorated photos. Interested parties should first contact The McCall Library to see if an image exists or if the image(s) can be reproduced. A list of the doctors can be found in the finding aid to the collection.

KING, CLINTON (91-09-228)
Contains 82 cartes de visite of various people, including famous Civil War figures Jefferson Davis, Albert Sidney Johnston, John B. Hood, P. G. T. Beauregard, John C. Breckenridge, Kirby Smith, and Wade Hampton, as well as 32 cabinet cards. Many of the cartes de visite and cabinet cards were made by local studios. Most of these people are not identified but the varied nature of the images gives insight into the numerous studios working in the city in the mid- to late-19th century. In addition, there are two nineteenth-century photo albums belonging to the Clink family that contain many cartes de visite, many from Mobile studios.

MASON, I. P. (89-01-183)
The 67 glass plate negatives in this collection were taken c. 1900. Subjects include picnic scenes at Shelby Springs, Alabama, a Sigma Alpha Epsilon fraternity group photo, and portraits of unidentified groups and individuals. Twenty of the best images have been printed.

PALMER STUDIO (80-03-46, 85-07-105)
Contains approximately 145,000 black and white and color safety negatives (4 x 5 and 5 x 7) dating from 1958 to 1990 (with some years missing). Subjects include portraits, weddings, Mardi Gras, and buildings. Some of the pictures were used to illustrate articles in Catholic Week. Of particular interest are the numerous portraits of local African Americans, as well as a memorial march after the assassination of Martin Luther King Jr., and an anti-Vietnam War rally. The collection is currently closed fro processing.

SHERIDAN, LOUISE (91-03-222)
Contains approximately more than 30,000 studio portraits made by Mrs. Sheridan from the 1938 tp 1996 (Bulk 1954-1991). The early portraits are in black and white, the later ones are in color. The negatives are arranged alphabetically and most are dated. The negatives are printed upon request

STUDIO PORTRAITS
Miscellaneous portraits from assorted Mobile studios. Included are images made by A. Sandoz, Brown's Studio, the Burnitt Studio, C. Barnes, the Boyle Studio, Frank Sandoz, the P. E. Johnson Studio, Reed and Wallace, the Sandoz Studio, the Swift Studio, the Wallace Studio, William Reed, William Stanton, and Wilson's Studio. Most are cabinet cards dating from the 1860s or 1870s to the early 1910s. Of particular interest are 5 photographs of the Lomax Rifles.