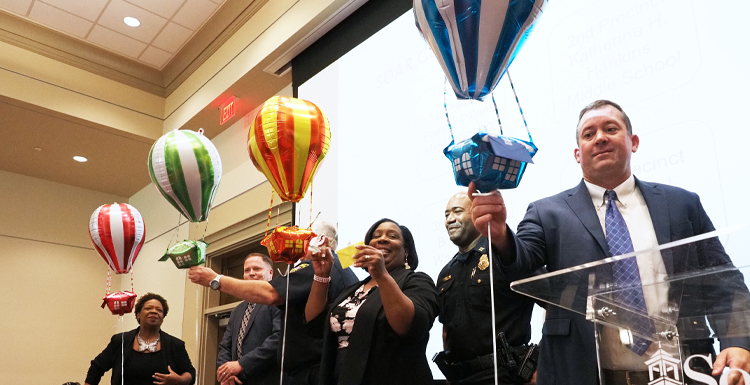 The University of South Alabama launched SOAR, short for Strengthening Opportunities for Achievement and Resilience, at the MacQueen Alumni Center July 27, 2022. South is collaborating with the Mobile Public Schools and Mobile Police Department in this five-year initiative, which will include Causey, Hankins, Pillans and Washington middle schools. At the launch, the principals of each school chose a balloon that revealed the year intervention strategies would begin at their schools.

The University of South Alabama, in collaboration with the Mobile County Public Schools and Mobile Police Department, announced today the launch of SOAR, an initiative focused on reducing youth violence and suicidality.

Short for Strengthening Opportunities for Achievement and Resilience, SOAR will be implemented under the umbrella of Operation Echo Stop, the Police Department’s initiative launched in February to help stop gun violence in the city.

“I believe we’re in, and have been, at a critical junction with youth violence for decades,” said Commander Curtis Graves, with the Mobile Police Department’s Office of Strategic Initiatives. “Youth violence has become a public health crisis and should be treated as such, regardless of the size of the town or city you live in.”

SOAR is supported by a five-year, $3.5 million grant from the National Institutes of Health. The award was made public at a news conference at the MacQueen Alumni Center on South’s campus.

The first year will include baseline data collection to identify rates of youth violence and suicidality in Mobile before the intervention process begins. 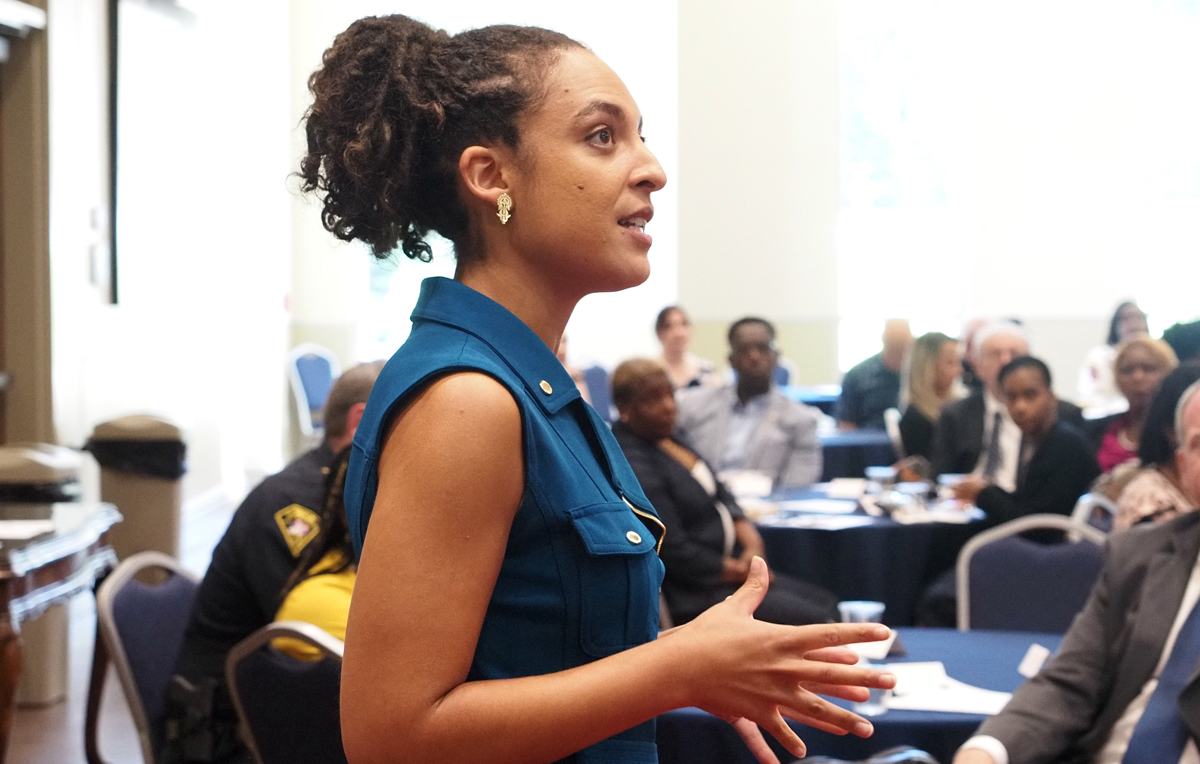 Dr. Krista Mehari, assistant professor of psychology, said she hopes SOAR will become a national model for youth violence prevention. “We want to intervene to change the trajectory before these youth get started on a path that could end in death, injury or incarceration,” she said.

University researchers will survey youth about their behaviors and experiences. There will be four participating middle schools, one in each of the city’s police precincts. The project will include school-based strategies, law enforcement strategies and integrated community intervention.

“We are focusing on middle school youth, because research shows this age sees the biggest increase in youth violence,” said Dr. Krista Mehari, assistant professor of psychology and principal investigator for SOAR. “We want to intervene to change the trajectory before these youth get started on a path that could end in death, injury or incarceration.

“We are hoping to create a national model for youth violence prevention.”

Mobile County Public Schools Superintendent Chresal D. Threadgill said SOAR is yet another way the community can collaborate to address the negative impact of violence on Mobile’s youth.

"SOAR is a worthwhile initiative that will expand upon the work that school counselors, social workers, teachers, administrators and security personnel have been doing to make sure that we are meeting not only the academic goals of our students, but also their social and emotional needs,” Threadgill said. “We are looking forward to working with the University of South Alabama and the Mobile Police Department on this very important project."

“Dr. Krista Mehari has been relentless in her pursuit to contribute to reducing youth violence in Mobile since she arrived at the University,” said Billingsley. “Considering all of the efforts of Mobile County Public Schools, the Police Department and the University of South Alabama, SOAR will build on progress made and partnerships formed, with the common goal to end youth violence. SOAR represents togetherness and reminds me of the African Proverb. ‘If you want to go fast, go alone. If you want to go far, go together.’"

In recent years, Mehari and Dr. Phillip Smith, a professor of psychology, have been working on a separate project focused on gun injury prevention. SOAR expands on what they learned about gun injuries from that study while building on the existing relationships with the Police Department and school system.

“We cannot arrest our way out of the problems we face with youth and the crimes they commit,” Graves said. “We need to become more proactive.”

Graves said Mehari and other South faculty have helped the department in its efforts to improve the perception of public safety by understanding the “science of behavior,” which he believes is at the core of public safety.

“Dr. Mehari’s facilitation of training to police officers on the development of the adolescent brain continues to invoke critical thinking of officers responding to complaints for service of which youth are involved,” he said.