South Storytellers on the Assembly Line 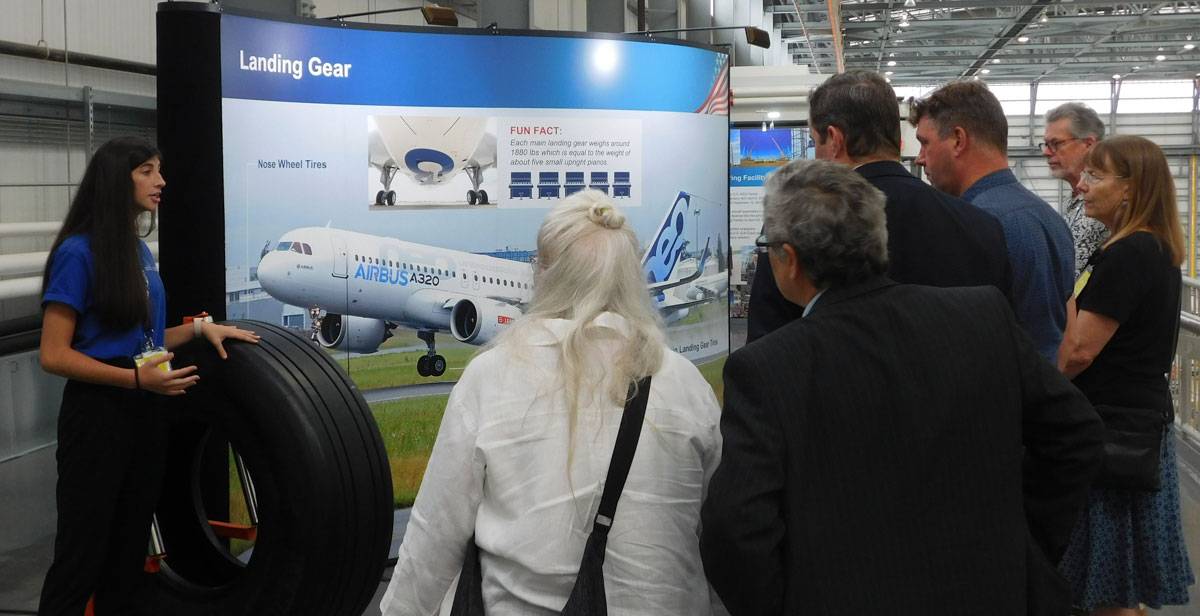 Emily Fogt was among nine University of South Alabama hospitality and tourism management students who led tours of the Airbus Final Assembly Line facility for a recent conference.

Nine University of South Alabama students got on-the-ground training for a career in hospitality and tourism management by acting as tour guides for Flight Works Alabama during a recent visit from participants at the Titanium International Conference held in Mobile.

More than 1,000 business people, including corporate owners and vendors, attended the conference where one of the highlights was a tour of the facility where Airbus builds the A320 family of aircraft.

“Our students just knocked it out of the park,” said Dr. Evelyn Green, assistant professor of hospitality and tourism management, which prepares students for careers in a variety of businesses, including the hotel industry as well as nonprofits and government agencies that promote tourism and travel.

“Flight Works Alabama had asked for our tourism and hospitality students to show their visitors real Southern hospitality by acting as their tour guides. We had only one day to train these students how to be tour guides and to learn everything there is to learn about the basic assembling of an aircraft. That was a tall order we put on them, but they handled it extremely well,” Green added.

Green, director for USA’s Hospitality and Tourism Workforce Innovation Alliance, designed the customized training, and Robin Fenton, consultant for Flight Works Alabama, wrote scripts for the students. With the help of Barry Bukstein, a volunteer and seasoned tour guide, the Alliance trained the students for their assignments in one day. Flight Works Alabama is an innovative facility under construction at the Mobile Aeroplex at Brookley. When it opens in June 2020, it will be a gateway for public tours of the Airbus Final Assembly Line as well as offering educational opportunities for the public. Flight Works Alabama has partnered with nine universities, but USA is the only one that will offer hospitality training.

“Each student learned different aspects of the presentation, ranging from the history of Brookley Field, the history of Airbus coming to Mobile and then moving into how Airbus’ A320 planes come together on the assembly line,” Green said. “Each presentation lasted about four minutes, which means each student had to tell their portion of the story in four minutes. We put attendees in groups of 10 to 15 with three to four groups touring at the same time. A tour took about 40 minutes to complete.”

Fenton described the students as “amazing and exceeding all our expectations.”

“They did an excellent job of sharing the Airbus story. They took their scripts and put them into their own words. I received only positive comments from the conference attendees. Dr. Green’s team will continue working with us, and we hope to hire some of these students when Flight Works Alabama opens,” Fenton said.

Dr. Robert Thompson, chair of hospitality and tourism management, said “the students were taken a little out of their comfort zones initially, but it didn’t take long for those essential skills in hospitality to kick in, and they showed these visitors warm and welcoming Southern hospitality.”

Carson Riley Bentley, a junior from Muscle Shoals, came to South because of the reputation of its hospitality and tourism department.

“At first, I was really nervous, but after the first group went through, I realized I had been overthinking it,” Bentley said.

He began his presentation by welcoming the visitors to Airbus, introduced himself, then launched into how there are only four facilities like Airbus Mobile in the world, and the one they were visiting is the only one in the United States.

“Every 28 days, Airbus gets enough new parts to build four new airplanes, and I told them where some of the parts came from because this was an international group,” Bentley added. “It was definitely a learning experience, and I won’t forget it because I have more confidence now because of it.”