The recipient of this year's William “Willie” Peck Memorial Scholarship is Chloe Giardina, an undergraduate student majoring in elementary education.

William “Willie” Peck, a graduate of the University of South Alabama and beloved teacher at Robertsdale High School, passed away on February 14, 2021. After receiving both his bachelor’s and master’s degrees from the College of Education and Professional Studies, Peck, a native of Louisiana, spent his entire career at Robertsdale High School teaching government and economics. He was recognized as Teacher of the Year in December 2020. 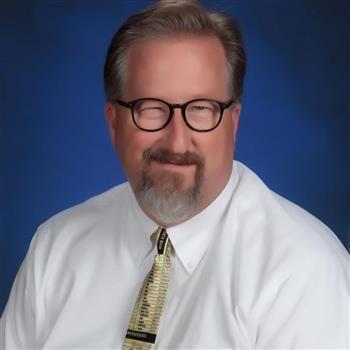 Soon after Peck’s passing, the William “Willie” Peck Memorial Scholarship was formed by two of Peck’s fraternity brothers. Peck was a dedicated member and active alumnus of the Sigma Alpha Epsilon fraternity. Ed Donaldson and Michael Summar, both alumni of the University, formed this scholarship to honor Peck’s memory and, through others, perpetuate his dream to educate students to make the community stronger. Each year, a student from Robertsdale High School who plans to major in the College of Education and Professional Studies is chosen to be a recipient of the award. The recipient must be an undergraduate student with a GPA of 3.0 and a score of 23 or higher on the ACT.

The recipient of this year's William “Willie” Peck Memorial Scholarship is Chloe Giardina, an undergraduate student majoring in elementary education. Like many others, Giardina was inspired by Peck, and she is humbled and honored to be chosen to carry on such an outstanding legacy. Giardina, a former student of Peck, applied for this scholarship in hopes that it would aid her to getting one step closer to leading a classroom in the way Peck led his.

“Mr. Peck was an exceptional teacher and a kind man,” Giardina said. “He fully immersed himself into his teaching career and ensured that every student's life was changed for the better when they stepped foot into his classroom. Mr. Peck was a loyal man who made everyone, including myself, feel important. He leaves behind many friends and students in my community who adore him and mourn him. I am so thankful to have been chosen to represent the life's work of such a stellar man.”

Giardina was fortunate enough to know Peck outside of the classroom as well, as Peck was a dear friend to Giardina’s family. She remembers going to many crawfish boils hosted by Peck.

“Mr. Peck loved cooking for crowds of family and friends,” Giardina said. “One of his favorite things to do was to boil crawfish. He had a secret recipe, and they turned out perfect every time. I will always cherish the memories that I have of Mr. Peck.”

After taking a tour of the University of South Alabama during her sophomore year of high school, Giardina knew that South was the place for her. Both of her parents are alumni of the University, and she has heard them talk about the endless opportunities offered to them while students at South. Giardina recently started her first semester at South as a student in the College of Education and Professional Studies. She is excited to meet new friends, make new memories and make Willie Peck proud.

According to the principal of Robertsdale High School, Joseph Sharp, Giardina is a well-deserving recipient of the William “Willie” Peck Memorial scholarship.

“Chloe Giardina was an outstanding student while attending Robertsdale High School, and I am sure she will make a fantastic teacher after she graduates,” Sharp said.

Peck had a passion for teaching and made an impact on students inside and outside the classroom. As an active member of the Graduation Task Force at Robertsdale High School, he worked tirelessly to help seniors reach the finish line and graduate with their cohort.

“Along with being an exceptional teacher, Peck was also a great friend, coworker and colleague to many,” Sharp said. “He helped out coworkers, new and old, many times in many different ways. He would always be happy to help with classroom projects and as a handyman because he could do a little bit of everything. One project included giving the teacher’s lounge at our school a makeover. The project included new paint, new cabinets and a coffee bar. He also held many end of the year celebrations at his home.”

Along with being a dedicated teacher and coworker, Peck had many friends, including the lifelong friendships he made as a member of the Sigma Alpha Epsilon fraternity. Donaldson graduated from South in 1989. He described Peck as an outstanding person that was a true friend to everyone.

“He lived the creed of our fraternity and was the epitome of ‘The True Gentleman,’” Donaldson said. “To maintain those fraternal relationships, he was part of a core group, including Michael, that began a yearly fishing trip in Orange Beach for SAE alumni. With his continued efforts, that event has occurred every year for the last 27 years.”

“When Ed and I decided to start the William “Willie” Peck Scholarship, we knew it would be the best way to honor Willie,” Summar said. “Even from his early days at the University of South Alabama, Willie taught and educated his family, friends and colleagues every day. He always had something new to share and a way to explain it so that everyone would understand.”

Another fraternity brother from the chapter, Thomas Boone, also considered Peck to be a true friend.

“When Willie passed away, I was sharing and listening to all the Willie stories,” Boone said. “It finally dawned on me that I wasn’t alone in my bond with him. Everyone felt it. That was his way; he made us all feel special. A true gentleman and a true friend indeed.”

To learn more about the scholarship, visit giving.southalabama.edu/peck.