Posted on November 2, 2020 by Lance Crawford 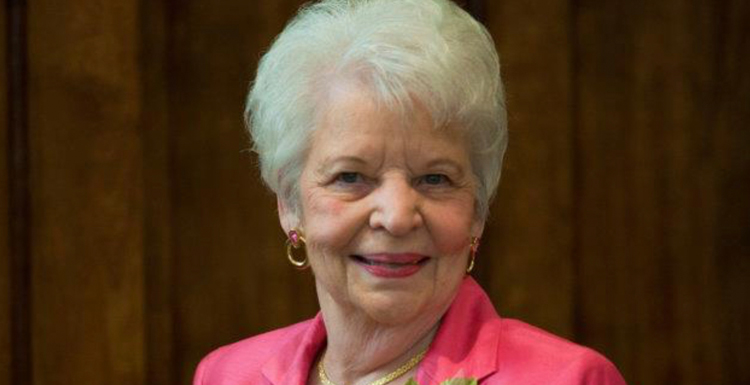 When Frankie Jenila (Nila) Clardy moved from Livingston, Ala. to Mobile with her husband Bob it interrupted her college career as she was working toward her bachelor’s degree in education. As luck would have it, Clardy had an option. It was the early 1960s, and the University of South Alabama had recently opened and offered an education degree, so she enrolled.

“There was only one building and a dirt parking lot, that often muddied my shoes,” she said.

Clardy was part of South’s first commencement in 1967 as she and 87 others received baccalaureate degrees that year. It also was the beginning of an amazing family connection to the University.

Clardy eventually earned her master’s degree at South. Bob was part of the Mobile County Public School System board that approved the University’s request to buy the land to build. Their two daughters, Phyllis and Sandra grew up to be Jags, both earning bachelor’s and master’s degrees.

Their Jaguar family tree continued to sprout branches. Sandra’s son Justin Litaker received his bachelor’s from South and is a philosophy instructor at his alma mater. Her daughter Candace was awarded her bachelor’s and master’s degree. Candace’s husband earned two undergraduate degrees from South. Another of Sandra’s sons, Cole, attended USA while her stepdaughter and daughter-in-law both work at the University.

Clardy never pressured any of her children or grandchildren to attend South, but she was happy they chose to stay in Mobile to get their education.

“It was natural for us to end up there,” Clardy’s granddaughter Candace Headland explained. “Our love for South started at an early age.”

Her mother, Sandra Roberts added, “it’s an excellent University and a big asset for Mobile.”

The family enjoyed the benefits of staying close to home such as the occasional home cooked meal and use of their parent’s washing machine, but South offered more than just   convenience.

“South was diverse enough for me to meet my best friends, none of whom are from the local area,” Headland said. “It’s where I found my love for my career and for my work in the community.

Decades removed from her time at South, Nila and Bob consider themselves the Jaguars biggest fans, attending every home football, basketball and baseball game possible. They also have 17 great-grandchildren, none yet old enough for college, but it’s a good bet many will continue the family tradition and enroll at USA.

“I grew up going to the games with my grandparents and now I get to see my own kiddos enjoy going with them,” Headland said.

Keeping South all in the family, generation after generation.