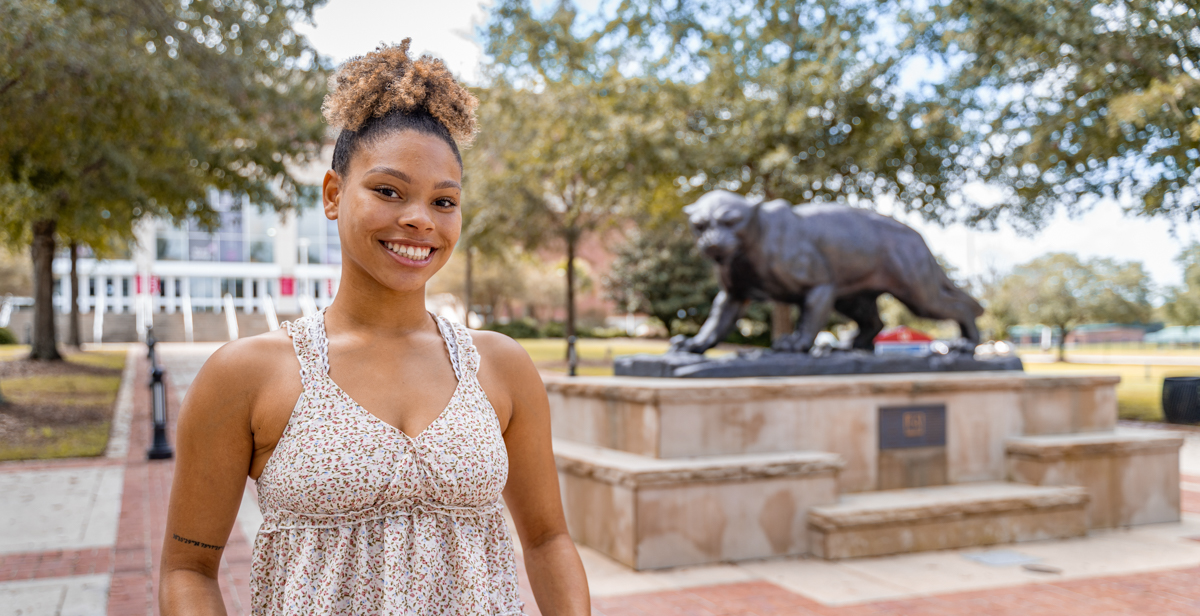 Kaylyn Cordrey, an exercise science freshman from Delaware, said the injuries she suffered as a tap dancer has led her to consider a career in physical therapy.

Kaylyn Cordrey grew up dancing in Delaware. She was a soloist for a competitive tap team called the Alley Cats. They won regional and national championships.

Years of tap and ballet, though, took its toll.

“Being in dance for so long, I’ve accumulated so many different injuries,” she said. “I’ve rolled my ankle so many times I can barely feel it. I can’t feel the top of my toes.”

Her injuries and time in rehabilitation led her to consider a career in physical therapy. She’s majoring in exercise science at the University of South Alabama.

She’s chose South because of a scholarship she won from the national Distinguished Young Women organization, which is based in Mobile. She learned about the group from a dance friend.

“She told me, ‘There’s this organization that you have to get involved with – I’ve been telling them all about you,’” Cordrey said. “So I went out and did that, and there was this competition where I tap danced and I won.”

She comes from the small town of Millsboro in southern Delaware. Her mother is a former attorney who became a schoolteacher. Her dad is a graphic artist with a sports video business.

“I get my drive and determination from my mom,” she said. “I get my creativity from my dad.”

When Cordrey moved to Alabama, she left all of her dance shoes back in Delaware. She’s a college student now. This is a new chapter in her life.

At South, she lives on campus. She’s a sneaker addict who likes jeans and Jaguar tops. She still wears her high school graduation ring.

In Millsboro, Cordrey worked part-time at a pizza restaurant. She also did 75 hours in a physical therapy clinic, which turned her attention to pediatric care.

“I learned that I didn’t want to work with adults or athletes,” she said. “You know, we athletes, we’re never going to say things hurt, because we always want to compete. With kids, they’re going to tell you exactly what happened, where it hurts, and what they had for lunch. They’re funny. They have no filter whatsoever.”

Was it hard moving all the way from Delaware to Alabama?

How does it feel being on your own?

You sound like you’re from the Northeast. Can you understand Southern accents?

“No. Especially the first week, it was a lot of ‘What? What did you say?’ A lot of my friends are from Montgomery, Birmingham or Gadsden. I’m like, ‘You have to speak up and enunciate.’”

What about South Alabama football? You watch the Jags?

“Oh, I’ve been to all the football games. It’s new for me, watching a team win. In high school, our sports teams were terrible. Our football team lost every game. It’s nice when your team wins so you can celebrate.”

Have you gotten to explore much of Mobile?

“I went roller skating for the first time with some of my friends. I fell every time, flat on my behind. It hurt and I hated it. I told them, ‘I’ll drop you off next time.’”

“We play volleyball in the pool at the Student Rec Center. So much fun. There’s a volleyball net in this vortex area where the water swirls around — which is weird, because you can get carried away. Once you get your footing, though, you can play.”

What about your classes?

“I’ve got math, English and kinesiology. My psychology class is hard. My public speaking class is easy. With Distinguished Women, I’ve done a lot of speaking.”