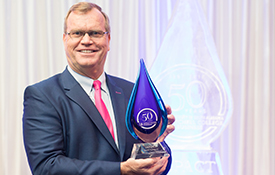 When asked what’s memorable about MCOB, Jerry recalls a conversation with an accounting professor who questioned his ability to graduate or even lead a successful life. A bit shocking? Yes!  Jerry admits he did not come across as studious. Rather, he was the casually dressed, laid back kind of guy, with personality, of course. Some may have thought he wouldn’t amount to anything, but he listened and he learned.

Jerry will tell you with certainty he feels well served by his USA Marketing degree (1978).  When he left the big corporate world to start his own business, he realized more than ever how beneficial his education from MCOB had been.  Mitchell College prepared him well – in finance, accounting, management principles and, of course, marketing – and all that he absorbed is confirmed through his very interesting career.

While in college, a fraternity brother approached Jerry with an opportunity to manage his rock band.  Simple rationale – Jerry had to know what he was doing because he was taking business courses. After first wondering if the arrangement would work, Jerry agreed under two conditions:  pricing and a marketing plan was completely up to Jerry. With pricing theory part of his knowledge base (thank you Mitchell College), Jerry tripled the band’s booking rate to create implied value and began marketing to out-of-town fraternities and sororities.  By exploring fresh markets he tapped customers who didn’t know the band from their local exposure.  By creating the image he wanted he succeeded in raising their price and booking better events.  A $350 local band became a $1,400 major event band on the road. Jerry and the band were happy, and the customers were ecstatic!

Close to graduation, Jerry realized with his student loans and no bankable collateral, starting an entertainment company was out of his reach.  He needed a job.  So with a new haircut and a business suit Jerry began interviewing, and soon landed a well-paying sales job selling roofing materials for GAF in Mobile. He quickly exceled taking on larger territories. He also developed a great relationship with his boss. One day being curious why he was selected for the job, Jerry’s boss credited the experience managing the band!

His rationale? Any kid living in a fraternity house who can develop and implement a marketing plan with applied pricing theory and had the discipline to do so without supervision, understands business and is motivated to succeed.

After just over three years, Jerry left that first job to start The Lathan Company.  Lathan Company specializes in Historic Restoration of Landmark Buildings and Religious properties.  Based in Mobile, Lathan Company has 50 employees and operations in New Orleans and Washington, D.C. (www.lathancompany.com).

Jerry originally had the idea to enter the entertainment industry when managing his fraternity brother’s band, and after an interesting encounter with a well-known movie executive many years later, it happened. Jerry is co-owner of Big Easy Studios in New Orleans where some of the largest movie productions in the past five years have been filmed. Among the major motion pictures filmed at Big Easy are:  Jurassic World; Dawn of the Planet of the Apes; Terminator 5; Daddys Home; Jack Reacher and Geostorm just to name a few.

In 2010 he led an elite Architectural Team to evaluate the earthquake damage to the historic landmark buildings of Haiti.  Their findings were published in a White Paper for the UNESCO World Heritage Fund.  The Lathan Company has received the Louisiana Historic Society Award for Excellence in Historic Preservation (2016) and the Mississippi Architecture Institute Award for Historic Preservation (2009).

Jerry believes the Mitchell College of Business was important in the development of his business skills, and he believes in giving back to his alma mater.  So when Abe Mitchell asked Jerry if he would begin to contribute to make MCOB an even better business school, Jerry gladly helped.  Remember the accounting professor that once questioned if Jerry would even graduate? The very classroom it occurred in has now been renamed Jerry and Terry Lathan Accounting Classroom in honor of his gift to South Alabama.

He credits his success to the simple principals of doing the right thing, trying hard, and working every day.