African Americans make history at the USA College of Medicine

Posted on February 18, 2022 by Nichelle Smith-Rodgers 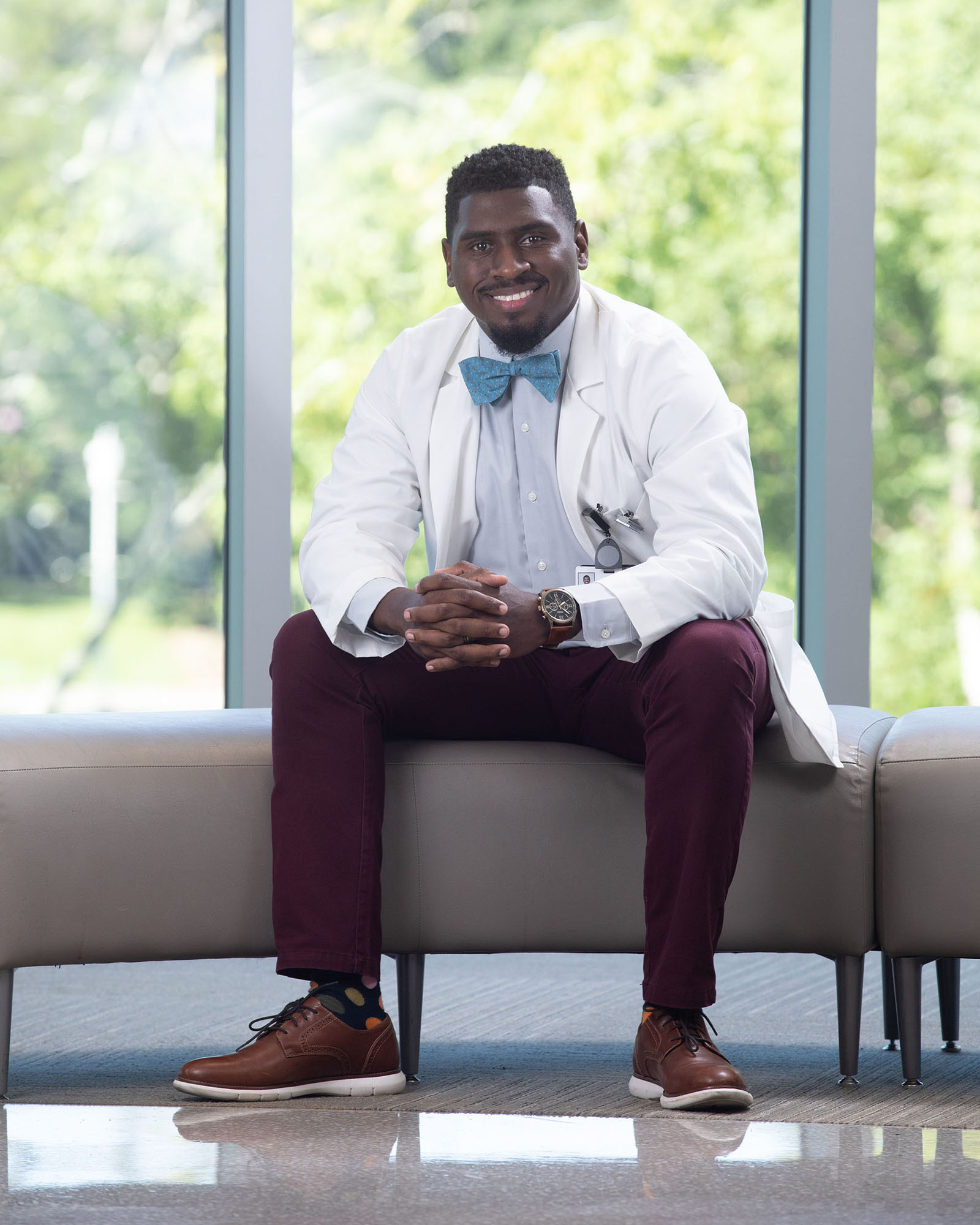 “As a Black man, the first time I came in contact with a Black physician was during my master’s degree program,” said Carey Johnson, a second-year medical student at the USA College of Medicine. “I often find myself thinking about how I, as a medical student, can support and inspire more minorities as they choose medicine as a career.”

“These numbers seem substantial until they are compared with the 516,304 physicians that identify as white,” Johnson said. “While there may be many factors as to why there is such a disparity, I believe that representation remains a large part of the problem.”

Johnson, who serves as president of the Class of 2024, is proud to make history as his class represents the largest class of students to enter since the USA College of Medicine’s inception in 1973.

“As one of the most diverse classes to pass through these sacred halls, I hope that our presence sets a major precedent for future classes,” Johnson said. “I am proud of the cultural, racial, religious and geographic diversity that dwells within the Class of 2024. Our multitude of backgrounds allows us the opportunity to grow and develop from our shared experiences.”

During her time at USA, Sanders said it never really sunk in that she would end up becoming the first Black female graduate at the USA College of Medicine, even though she didn’t have any female classmates who looked like her. “I was so young, I didn’t fully understand the magnitude of what was taking place,” she said. “I was just focused on becoming a physician.”

Johnson Haynes Jr., M.D., assistant dean of diversity and inclusion at the USA College of Medicine, has spent the duration of his professional career at the medical school in Mobile.

“Being the first African American resident, chief medical resident and clinical and basic science faculty member triggers emotions ranging from loneliness to pride,” he said. “At each turn I felt I had to do well because of my belief that for other African Americans who followed to have a real chance would be influenced by how well I performed. This feeling may not have reflected what was really true, but it did drive me to be the best that I could be. Hopefully, my journey has and will continue to open doors for other African Americans pursuing a career in medicine.” 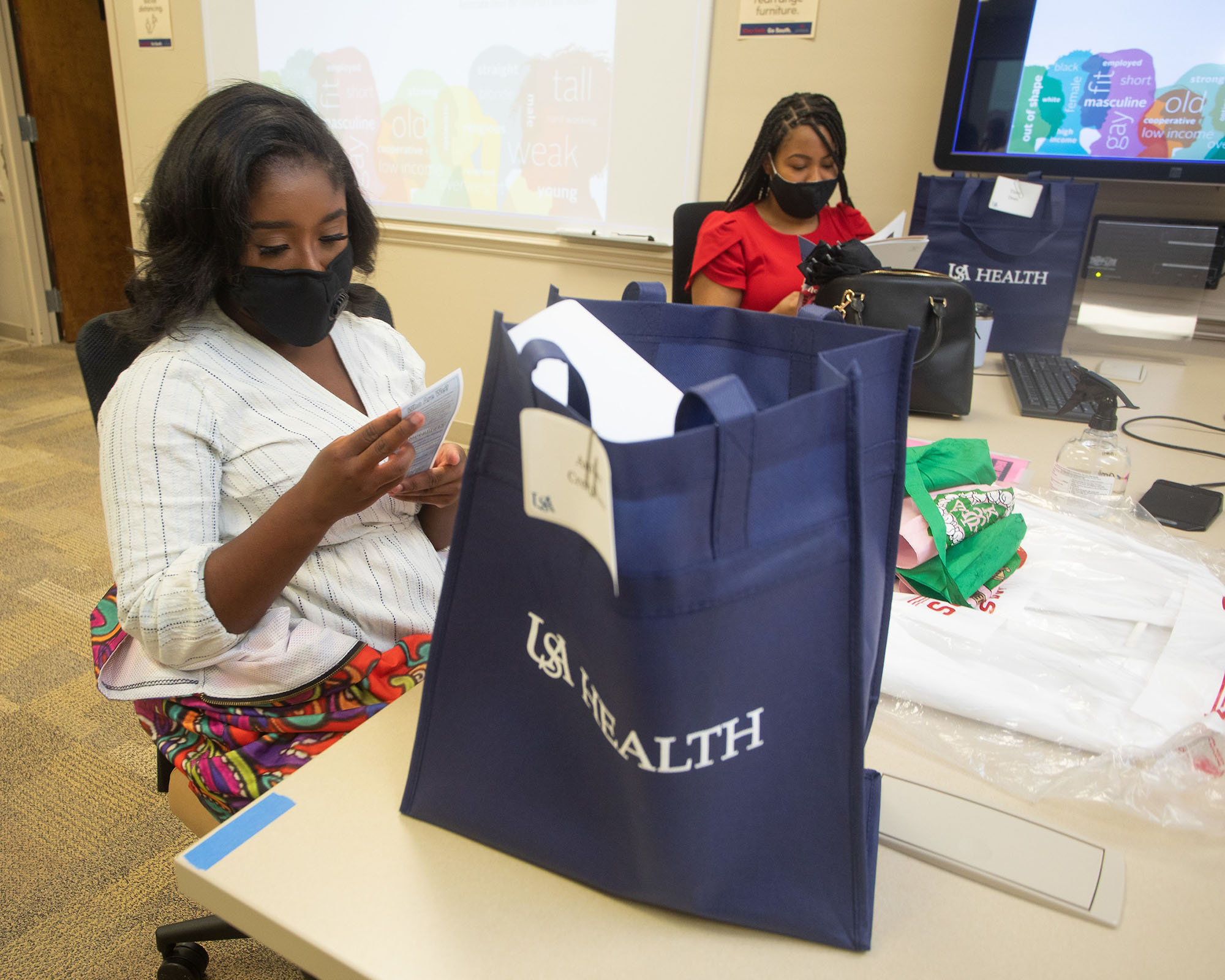 During the last 40 years, Haynes has recognized numerous changes in the culture of the College of Medicine. “The class diversity in the M.D. and Ph.D. programs is much better, although it still does not represent the racial makeup of Alabama,” he said. “Diversity amongst the clinical faculty is better but still has a ways to go. “

Like Haynes, other faculty members such as Franklin Trimm, M.D., associate dean for diversity and inclusion and assistant vice president for medical affairs, are making it their mission to continue to seek change in the culture of the College of Medicine. Trimm is responsible for the oversight of policies and programs related to diversity and inclusion for students, residents, research and clinical fellows, faculty and staff at USA Health and the USA College of Medicine.

During the summer of last year, the Office of Diversity and Inclusion was tasked with identifying and addressing areas of improvement in the culture and climate of USA Health and the USA College of Medicine.

The first phase of the USA College of Medicine’s response was the development of the Justice Initiative. The initiative was built on the framework developed by White Coats for Black Lives – a national, underrepresented minority medical student-run organization working to dismantle racism in medicine and promote the health, well-being and self-determination of people of color.

The Office of Diversity and Inclusion identified 14 areas of focus that are significant in addressing injustice within the context of training future physicians and scientists. An assessment in the form of a report card that gave A, B and C level performance on each metric was utilized. The metrics were assessed through the perspectives of three groups:  USA COM medical and graduate students, residents and fellows in the graduate medical education programs, and the College of Medicine faculty, leadership and staff.

The areas of improvement identified by the assessment have become part of the Continuous Quality Improvement (CQI) processes of the USA College of Medicine with continued monitoring with iterative improvement goals to be developed through the USA COM Committee on Diversity and Inclusion, and the Diversity, Equity and Inclusion Subcommittee of the Graduate Medical Education Committee.

“There now exist faculty who genuinely care about those who historically were not afforded the opportunity to be physicians and scientists,” Haynes said. “Those in leadership positions are more likely to stand up for diversity, equity and inclusion.”

To those aspiring Black medical students, residents and fellows of basic science faculty members that will follow in Haynes' footsteps, he has one piece of advice: “Lead by example.”

“Be adaptable, seek opportunities, know that having the respect of your peers is much more important than being liked,” he said. “You must have a plan, prepare, persevere, be passionate and perform.”